Not to be confused with Plessie.

Dorrie, also known as Dorrie the Sea Dragon,[1] the Swimming Beast,[2] or Nessie,[3][4] is a large, friendly plesiosaur-like character who debuted in Super Mario 64. He helps the player ride across water or reach higher areas. Super Mario Odyssey explicitly refers to Dorries as a species,[5] and it features purple and yellow Dorries in addition to blue. In terms of design, Dorrie has a few elements in common with Yoshis, such as the white area spanning the whole lower part of his body, from his lower jaw to his tail, and a similar round face that, since Super Mario 64 DS, even features a placement of the eyes and nostrils akin to that seen in Yoshis. Furthermore, the two species share the suffix -sshi (「ッシー」) in their Japanese names.

In Japan, plesiosaurs are known as long-necked dragons (「首長竜」), this being possibly the reason Dorrie was originally referred to as a sea dragon (「海竜」, written in hiragana as 「かいりゅう」 in Super Mario 64[6]), this being kept in the Western translations as well, such as the English and French ones. Additionally, Dorrie shares its Japanese name with Bahamutt.

“A gentle sea dragon lives here. Pound on his back to make him lower his head. Don't become his lunch.”
—Signpost, Super Mario 64

Dorrie makes his debut in Super Mario 64, where he lives in an underground lake in the Hazy Maze Cave. He is the focus of the first mission of the course, Swimming Beast in the Cavern. He constantly swims in circles, but he gladly gives Mario a ride if he gets on his back. It is also possible to steer Dorrie from there; Mario loses control of movement for a moment, then the player can control Dorrie by facing the direction they want to go. Ground-pounding on his back causes him to lower his neck, allowing Mario to climb onto his head to reach higher areas, such as the entrance to the Cavern of the Metal Cap. A sign near the lake in which he takes residence states that he might eat visitors if they get too close, although he is actually harmless. Dorrie is referred to as female in the Nintendo Power and Prima Games guides.[7][8]

Dorrie reappears in Super Mario 64 DS with an updated design, with the most noticeable change being a pair of goggles that are highly similar to the ones worn by the Dolphins in Super Mario World. He reprises his role as in Super Mario 64 by giving the player a ride wherever they want to go, although technically he is no longer needed for the first mission, because the island in the middle is now much lower and therefore easily accessible. Dorrie wears Wario's cap only during the first mission of the Hazy Maze Cave, unless the player is playing as Wario himself. Also, while the player can still ground-pound on Dorrie's back, it is no longer required, as he now lowers his head if the player approaches the base of his neck. 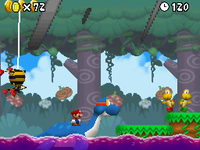 Dorrie returns in New Super Mario Bros. and appears in two sizes. Mario can ride on his back to cross large bodies of poison in World 4-1 and World 4-6. If Mario does a Ground Pound on Dorrie, he moves faster through the water.

Dorrie appears in Super Mario Odyssey, where it can be seen wearing a top hat and swimming in the Lake Kingdom, Mushroom Kingdom and Darker Side. Purple and yellow-colored Dorries also appear in the Seaside Kingdom, where they wear hats and are associated with the Crazy Cap shop. Additionally, a Rubber Dorrie can be purchased from the Lake Kingdom's Crazy Cap shop as a souvenir for the Odyssey.

In this game, genderless pronouns are used to refer to Dorrie.[9] This game depicts Dorries as speaking in long-held moaning noises, such as "AoouuuooOOooOooOoo," which are subtitled in parentheses. Power Moons are sometimes found attached to Dorries' back or belly, or flying above their heads.

Attacking a Dorrie with a Ground Pound or a Cap Throw startles it. One coin is produced when Dorrie's head is hit, which is possible five times in a row. 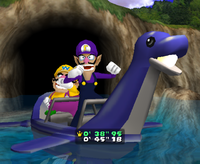 A boat in the shape of Dorrie in Mario Party 4

In Mario Party 2, Dorrie makes a small cameo in Mystery Land in the background lake, with his appearance resembling the photograph of the Loch Ness Monster.

In Mario Party 3, Dorrie, referred to by the in-game text as a female, is seen in an Item Minigame called Dorrie Dip. She also makes a cameo in the background of the board Creepy Cavern.

In Mario Party 4, Dorrie is seen as a paddle boat in the minigame Right Oar Left?

In Mario Party Advance, Dorrie resides at Loch Dorrie, and reveals that he is lonely after scaring away Mr. E. If Yoshi visits him, they become friends and Dorrie gives him a Gaddget, the Soil Sonar. However, the credits state that Yoshi has not seen him in ages. Despite Mario Party Advance having been released after Super Mario 64 DS, Dorrie uses his original design instead of his updated design.

In Dr. Mario World, Dorrie appears in the background of World 1 after it is cleared.