During the events of the game, Mario and Cappy crash land the Odyssey in this location after Bowser and the Ruined Dragon attack them. The crash leaves the Odyssey damaged, requiring three Power Moons to restore back to working condition. Mario fights and defeats the Ruined Dragon in this kingdom, enabling him to use the Odyssey again to leave and continue his journey to Bowser's Kingdom. 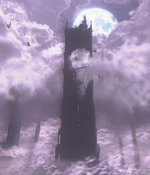 The moon frames the tower...ominously.

This tower once collected energy from lightning in the thunderclouds that constantly swirl here. Some say it was destroyed by repeated lightning strikes, but others note the unnatural shapes into which the tower crumbled and wonder if it fell into ruin for different reasons entirely.

Buried to the hilt.

Amid the ruins, these swords surely stand out. They're thought to be left over from a large battle here in Crumbleden. One certainly feels a sense of intentionality in the way they're stuck straight down, as if fallen from the sky. Some see them not as swords, but rather nails or stakes. Perhaps the eyelets at the top allowed ropes or chains through to anchor something, but it's impossible to say what.

Are there clues to what happened here?

It's only because of the people of Crumbleden's skill in construction that there are ruins left here to see. Their building style was reliable and straightforward, but whatever they'd hoped to accomplish by harnessing the fearsome power of lightning remains unclear. Some have theorized that the circular plaza atop the tower was built for a standoff of some kind. 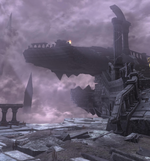 Doesn't it look like a creature of some kind?

It's thought that this altar was built so this former kingdom could communicate with (or perhaps confront) something. This is the only altar built here, and scholars have been keen to discover its intent. It's also said to be shaped like something in particular. The idea that it was meant to charge lightning has been disproven. The new theory is that it was built to call something down and then restrain the lightning.

There's got to be a logical explanation, right?

The stone here has numerous large slashes cut through it, often in parallel tracks suggesting giant claws. But that can't be right—what could claw through stone?

You'll see glowing spots scattered around on the ground. Engage in some amateur archeology by giving them a hearty stomp! 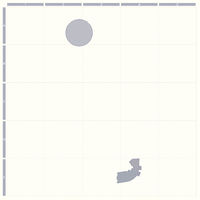 Main article: List of Power Moons in the Ruined Kingdom

In order to repair the Odyssey and progress to the next kingdom, Mario must collect three Power Moons.