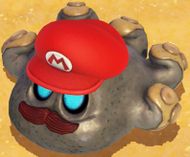 Gushens are purple flapjack octopus-like creatures encased in balls of water found in the Seaside Kingdom, Sand Kingdom, and Mushroom Kingdom of Super Mario Odyssey. They are normally found floating on the surface of the water in their water balls, occasionally making large vertical leaps. However, when Mario approaches, they shoot a powerful stream of water from their undersides. If Mario captures one, he can use it to fly. The result is similar to F.L.U.D.D.'s Hover Nozzle, in that it propels Mario upwards for a limited time before needing to be refilled by touching water, a Power Moon, or a Checkpoint Flag, although the height he can travel to is more akin to the Rocket Nozzle, and the high speeds he travels on water make it akin to the Turbo Nozzle. He is also capable of spinning while shooting to the side to spray all around him, and the water can clean away lava as though it were goop, like the Squirt Nozzle. Mollusque-Lanceur, the boss of the Seaside Kingdom, is a giant Gushen who resembles a giant octopus. While the Gushens have only golden mustaches, Mollusque-Lanceur has a large golden beard.

Gushens turn dark grey and move slowly on land without their water balls. When moving in this state, they leave a short wet trail that soaks the ground, causing it to have an uneven appearance. They can be defeated by spraying them as another Gushen, or simply ground-pounding them as Mario. They can also be defeated by a Cheep Cheep's tail swipe.

Only a single Gushen appears in Mollusque-Lanceur's rematch, and it will give Mario unlimited water supply due to the constant raining.