The Lost Kingdom is the seventh kingdom visited in Super Mario Odyssey. It is the greater location of Forgotten Isle, a large island surrounded by poison. After defeating Bowser in the Cloud Kingdom, he orders his airship to shoot cannonballs at Mario. Mario gets hit by one of these, causing both him and the Odyssey to crash-land in this kingdom. The Odyssey becomes damaged, forcing Mario and Cappy to explore the island and collect at least 10 Power Moons. They can use these Power Moons to repair the Odyssey and continue their journey to the next kingdom - the Metro Kingdom.

The Lost Kingdom is located south-east of the Cloud Kingdom and south-west of the Metro Kingdom. It is the only one of the kingdoms to not involve any bosses at all (not counting the Darker Side). The kingdom resembles an archipelago of islands shaped like a palm tree.

According to The Art of Super Mario Odyssey, the Lost Kingdom is based on the rainforests of Southeast Asia, likely the island of Borneo and the nations of Indonesia and the Philippines, especially since the music for the kingdom is based on gamelan, traditional Indonesian ensemble music made up predominantly of percussive instruments. Due to the Lost Kingdom's large bodies of liquid, tall tree trunks, and dense foliage, it also bears a resemblance to the island nation of Madagascar. 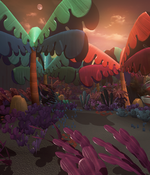 Few visit these remote islands surrounded by poison, but they are dense with plants that have followed a unique evolutionary path. There is a strange unity between the vibrantly colored plants, the odd animals, and the sea of poison surrounding them.

Some local species are quite colorful.

The Tropical Wigglers found here are not aggressive and are mostly genial and pleasant creatures. You should, however, avoid touching them, for safety's sake. They stretch and contract their bodies constantly and have a habit of stretching across major pathways, so you may need to wait for the right moment to pass. This behavior has given them the nickname "traffic lights of the island." Be sure to look both ways before your cross.

It even LOOKS evil.

The undisputed ruler of the skies here is the Klepto. This large bird has keen eyesight that enables it to spot prey from far above before swooping down to snatch it up in an instant. Once ensnared in its sharp claws, escape is quite difficult, and many smaller visitors have been carried off in this way. 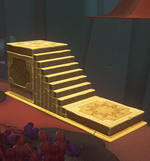 The exact mechanism is not yet understood.

The purpose of the distinctive ruins scattered throughout the island remains unclear. The starburst pattern that appears on them MAY indicate a spot of capable of withstanding a great impact. The builders clearly mastered stonework, as these structures still operate and move perhaps centuries after their creators had disappeared.

The so-called "guardians of the ruins."

The Trapeetle is a local hazard. Its large hands capture prey, who are held tight as the creature explodes in a tragic display seen absolutely nowhere else in nature. Best to avoid.

A Symbol from Ancient Times[edit]

Now seen all over the world, this starburst symbol is thought to have originated on these islands. But what does it communicate? The mystery may never be solved. 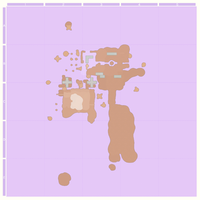 The Odyssey lands at the southeast end of the kingdom. Hint Toad and a pair of binoculars can be found nearby, as well as a Koopa Freerunning minigame after the main story is beaten.

Swamp Hill is directly north of the Odyssey, sitting near a poison waterfall and overlooking the Moon Shard segment down below. Aside from the Checkpoint Flag, there are some staircases Mario may shift the formation of with Ground Pounds. There are a few Tropical Wigglers in the area, as well as a few regional coins floating precariously over the surrounding poison, and a Power Moon in the branch of a nearby tree.

This Checkpoint Flag is on a small platform in the northwestern region of the kingdom. Right next to it is an 8-Bit Pipe behind a red door that takes Mario into an 8-bit section. In front of the 8-bit section are Fuzzies which travel in and out of the screen serving as obstacles either way. Outside of the screen, Mario may either use the Lifts or capture a Tropical Wiggler and traverse around the stumps past the Fuzzies to reach a Power Moon. Inside the screen, Mario may find another Power Moon as well as three regional coins at the top of the screen.

Rocky Mountain Summit is the highest point of the kingdom. The kingdom's Crazy Cap is located here, run by Toads in a Starshroom. There is a Toad outside the shop who encourages Mario to go right in and have a look around. The Checkpoint Flag is circled by coins. There is a palm tree with a Power Moon above it. Glydon rests at the edge, and can be captured to reach one of the surrounding islands. Later in the game, Princess Peach and Tiara can also be found here.

Main article: List of Power Moons in the Lost Kingdom

In order to repair the Odyssey and progress to the next kingdom, the player must collect at least 10 Power Moons.

Main article: List of regional coins in the Lost Kingdom

The Lost Kingdom contains 50 regional coins. They take the form of striped leaves which closely resemble a Super Leaf, but without the eyes or the missing piece on the upper left.