The Cap Kingdom is the first kingdom visited in Super Mario Odyssey. It is a gloomy, monochromatic kingdom filled with thick fog and hat-like beings called Bonneters, including Cappy. The resident Bonneters excel at ship-building and can even attach sails to their homes to convert them into airships. This kingdom also serves as the tutorial stage of the game, and is the greater location of Bonneton. Bonneton is possibly the joining of "Bonnet" (a type of headgear) and the city-name suffix "-ton". The Cap Kingdom island is located west of the Cascade Kingdom and northeast of the Mushroom Kingdom. Geographically, the kingdom is a top hat-shaped island covered in black vegetation, soil and ground. As the name Cap Kingdom implies, hat-shaped buildings and reliefs are everywhere in this land of tradition and formality. 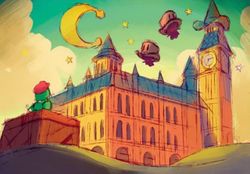 The kingdom in The Art of Super Mario Odyssey

As shown in The Art of Super Mario Odyssey, this kingdom is based on the real-world location of London (England), particularly the Victorian era, due to the architecture visible in the background, the misty environment and the clothing worn by the residents of the town. The residents also use many stock British expressions and hat-themed parodies thereof.

At the start of the game, Mario lands directly in this location after being knocked off of Bowser's airship. Here, he meets Cappy for the first time on the Glasses Bridge of Bonneton, and decides to join together to rescue Princess Peach and Tiara (Cappy's little sister). After traversing through the Central Plaza, Mario and Cappy reach the entrance of Top-Hat Tower, where they encounter some Mini Goombas, which Cappy notices recognize Mario in an aggressive manner. Inside the Top-Hat Tower, Mario learns to Capture by capturing a frog. After climbing through the Top-Hat Tower and reaching its summit, Mario must face against Topper, one of the Broodals, in order to gain access to the next kingdom - the Cascade Kingdom.

Concept art of the lampposts of Bonneton

With the Cap Kingdom being the first place that players visit after Mario's defeat in the opening cinematic, this world's strange and slightly disturbing environment was intended to reflect the player's feelings as they dive into this new game.[1] Bonneton was designed incorporating a silk hat-like design in various objects, with the lawn also recalling the felt of the hats.[2] A reduced number of colors was used in the design to make the moon look impressive.[2] The concept art shows that in the early design the undulating city in the background was already there, along with the airship of the Broodals and the spark pylon leading to Fossil Falls. On the other hand, the Top-Hat Tower was meant to have a small tower with another top hat on top stemming from the main building, as well as two windows that looked like eyes. The entrance to it looked like a statue of Bowser with a top hat, while the Bonneters had a body and a head, with eyes not being incorporated in the hats. The lampposts were based on hat racks with three hats on them rather than just one,[3] and had a curved main stem to distinguish them from street lights from Metro Kingdom and fit Bonneton.[3] 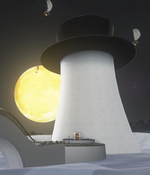 Architecture protrudes from the fog.

This eye-catching tower is famous in Bonneton, both as a landmark itself and for the spectacular view from the "brim."

Visitors are allowed inside, but many creatures call the tower home, much to the surprise of first timers.

In town, you will immediately notice the unique dwellings shaped like hats. These constructions double as both house and airship for the Bonneters, who take great pride in them.

Some of the larger "houseboats" even have two stories. As private dwellings, you can't just stroll inside, but the natives don't mind people climbing on top of their homes. Perhaps being atop private property comes naturally to these hat-like people.

A Spectacle of a Bridge[edit]

The bridge that connects the central square and the hills is called Glasses Bridge. It's a long, double-arched structure whose bottom is hidden in a sea of clouds. When you see it, you'll understand its affectionate nickname immediately. Many tourists enjoy the speedy thrill of rolling across the undulating structure—be sure to give it a try! 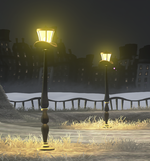 These unique lights only appear in Bonneton. Since the area gets so dark every time the moon goes behind the clouds, the lights are designed to be switched on with a simple turn of the lantern. The elegant design of these lampposts draws many tourists. They're even lovelier when turned on, so do give each one a spin as you pass by.

The bridge's waves go with the sea of fog.

The bridge connecting Central Square to Top-Hat Tower is built to retract in an emergency. If this happens during your visit, don't panic—just use the switch to restore the bridge.

These wooden posts are used as partitions or stoppers. If they get in your way, you can pound them down, but pulling them out is recommended. 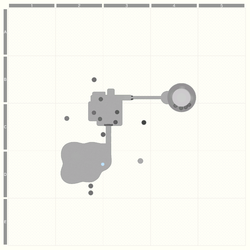 After obtaining the Odyssey in the Cascade Kingdom, it will land in the southwest corner of the map where Mario first arrived.

The Central Plaza is the main residential area of Bonneton. When Mario first arrives, it is in ruins from Bowser's attack. The Checkpoint Flag does not appear until Mario returns later after the plaza is rebuilt.

This Checkpoint Flag is found near the top of the Top-Hat Tower next to the doorway where Mario exits the tower's interior.

Main article: List of Power Moons in the Cap Kingdom

Main article: List of regional coins in the Cap Kingdom

The Cap Kingdom contains 50 regional coins, which take the form of top-hats. They cannot be collected until the player powers up the Odyssey in the Cascade Kingdom.