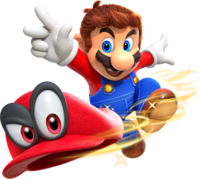 The Cap Throw is a move introduced in Super Mario Odyssey, which involves Mario throwing Cappy at a target by pressing

. Mario can throw Cappy to perform several actions, including hitting, using, or capturing enemies and objects; collecting coins; and jumping on Cappy to jump higher and farther. It can thus be considered the Odyssey equivalent of Mario's basic attack moves from prior 3D Mario games.

Additionally, Mario can throw Cappy in different ways depending on the buttons pressed and/or how

is shaken. Flicking both

upwards performs an Upward Throw, allowing Mario to hit enemies and objects above him. Flicking both

downwards (in midair) or flicking just one or pressing

during a Ground Pound's impact does a Downward Throw, which lets Mario hit things below him if he is in midair or near a ledge. Cappy spins like a wheel during a Downward Throw, so if he hits the ground, he rolls forward. This roll covers more distance than a standard Cap Throw, and it also follows any dips in the floor that a regular Cap Throw would soar over. Shaking both

while spinning performs a Spin Throw, which sends Cappy in a spiral motion all around Mario. The Spin Throw is similar to the Super Mario Galaxy games' spin or Tanooki Mario's tail whip, but it has more range.

Lastly, during the Cap Throw or any of its variations, shaking one of

In Super Smash Bros. Ultimate, Mario's new side taunt, which has him throw Cappy around him, is based on the Cap Throw.