Balloon World[1], also known as Luigi's Balloon World, is an online minigame that appears as part of an update for Super Mario Odyssey, released on February 21, 2018.[2] The minigame can be played by completing the main story and finding Luigi near the Odyssey in any of the kingdoms besides the Cloud Kingdom, Ruined Kingdom, Dark Side and Darker Side, and talking to him. Unlike certain online features in other Nintendo Switch games, a Nintendo Switch Online membership is not required to play Balloon World.

This minigame features two different modes: "Hide It" mode and "Find It" mode. In "Hide It" mode, the player has thirty seconds to hide a balloon somewhere in the kingdom. The player can choose to place the balloon before the time runs out or they can restart to try and find a different hiding spot. However, players cannot place a balloon high in midair or above pits and instead the balloon will be placed as close as possible to where the player tried to hide it. In "Find It" mode, the player has a set amount of time (3-40 seconds) to find a balloon hidden in a kingdom by another player in the world. To help the player, there is an arrow pointing to the direction of where the balloon is located as well as a meter counter that will decrease or increase depending on how close or far the player is from the balloon. However, the arrow will disappear after a few seconds and the player can make it reappear by standing still. Collecting three Coins while either hiding or finding balloons will increase the timer by one second. The player cannot enter into different areas that require warping in either mode and will return to the main area with Cappy saying they cannot because they are in the middle of a game. 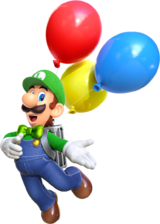 Artwork of Luigi for Balloon World.

Balloon World also features a ranking system, which shows the statistics of the player, such as how many Coins they received and how many balloons they found in a row. The player's rank is represented by stars, which are awarded for each objective that is completed. Each time the player ranks up, they receive a large sum of Coins; the higher rank they become, the more Coins are awarded, and the harder it will be for the player to find balloons, as more difficult balloons are more likely to appear for higher ranked players. For every 10 stars collected, Luigi will gain new balloons for his case. At first, he only has a red balloon, but at 10 stars, he gains a blue balloon. At 20, he gains a yellow balloon; at 30, he gains a green balloon; and at 40, he gains a purple balloon. If all 50 stars are earned, Luigi's balloons become golden and begin to sparkle, similar to how the Odyssey's sail turns gold and shiny after collecting all 880 Power Moons.

If online, a notification appears if other players try to find the player's balloons (green border), if one of the player's balloons is popped (red border), or when more coins can be earned than usual in a certain kingdom (black border). These notifications can be switched off in the Options menu. If an attempt is made while online and not in Balloon World, the player will automatically receive their coin reward, along with a notification displaying the user who made the attempt, and whether the balloon was popped or not.