Chargin' Chucks are large, burly Koopas that wear American football gear, debuting in Super Mario World. They wear white helmets with a blue and orange stripe, blue shoulder pads, red spiked cleats, and black shells, and have chubby, infant-like faces and small, squinting black eyes. In Super Mario 3D World, when their helmets are off, it is revealed that they have two spiky tufts of blue hair.

Chargin' Chucks first appeared in Super Mario World as common enemies who are quite durable against damage. Chargin' Chucks can attack in a variety of ways, including throwing baseballs, kicking footballs and flinging rocks with a shovel. They can also break through Rotating Blocks and Grab Blocks. Chargin' Chucks also act more aggressively when Mario is with Yoshi. Yoshi cannot eat this enemy, however. Other types have less direct attack patterns, such as splitting into three and charging forward and summoning or alerting other nearby enemies, such as Super Koopas and Rip Van Fish, using a whistle; one type of Chargin' Chuck also has the habit of jumping in place and clapping. Aside from the whistling Chargin' Chucks, all Chargin' Chucks, once jumped on, revert to simply trying to tackle the player. They are often found at the end of a level defending the Giant Gate. It takes three jumps on a Chargin' Chuck's head to defeat it for 800 points. Fire Mario can defeat a Chargin' Chuck with five fireballs for 1000 points (or 2000 points and three coins in the Game Boy Advance remake), as can Yoshi by spitting fireballs produced from eating a Red Shell at him. Caped Mario can defeat them with one swing for 100 points. Chargin' Chucks can also be defeated in one stomp if first hit by at least two fireballs by Fire Mario.

Descriptions of a variety of Chargin' Chucks

In the Nintendo Mario Mania Player's Guide, the different types of Chargin' Chucks (except the bouncing and the whistling Chargin' Chucks) are each given individual names:

They make the same sounds when they run and when defeated they use the same hit sound like in Super Mario World.

Chargin' Chucks return in Super Mario Odyssey as enemies in the Underground Moon Caverns of the Moon Kingdom and a secret area in the Ruined Kingdom that can be reached using a Moon Pipe. As they wear a helmet, Mario must first remove it from their heads before Capturing them, either with a jump or a hat throw attack. In Chargin' Chuck form, Mario can charge through boulders and enemies at a high speed, but he is unable to jump at all while capturing them. 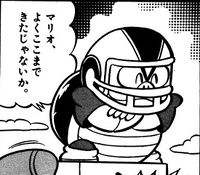 Chargin' Chucks appear in Super Mario-kun's first 6 volumes, in the Super Mario World arc. In the very first chapter, the last enemy Mario, Luigi, and Yoshi face is a Chuck that almost succeeds in killing Mario by shoving him off a cliff. Yoshi jumps off to save Mario and, by eating a blue Koopa Troopa, they emerge in time and burn him with their fire power.

A Chuck is later met in the 13th chapter, where a duplicating Chuck is, once again, the last enemy. He faces the Mario at the end of the "Infernal Athletic Level", one step from the Giant Gate. Mario manages to locate the real Chuck with the false promise of a SNES. Enraged, the Chuck tosses to them a spiny football ball and Mario is tossed into a ? Block which contains a Super Star but, unable to reach it, Mario tosses his cape. The cape comes to life and beats the Chuck.

In the first chapter of volume 2, a Chuck is (once again) the last enemy of the chapter. Kamek (who disguised himself as Yoshi), unable to convince the Mario Bros. he is the real deal, is used as a club to defeat the last Chuck remaining, breaking Kamek's disguise spell.

In volume 6, while Mario, Luigi, and Yoshi are in balloon form, they attempt to hinder their progress by throwing a football at Mario, but the football bounces and hits one of its friends. It then throws a spiked football at Mario, making Mario fall into a Warp Pipe. Mario, however, collects a star, fires from the warp pipe, and then punches them in the face, defeating them. 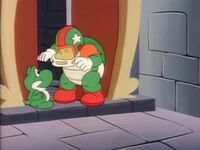 Chargin' Chucks also appear in the Super Mario World animated series, where they are referred to as Koopa football players. Due to the fact that they appear throughout several episodes of the series, they appear to have replaced Goombas and Koopa Troopas, who make relatively few appearances on the show, as Bowser's main shock troops. Much like their in-game sprite, they are green with orange sleeves, but their helmet, shell, arms, and legs are green, while the stripe on their helmet is red, the star on their helmet is white, and the rim of their helmet are orange.

In Dinosaur Dilemma, a group of Chargin' Chucks ambushes Mario and Yoshi while they are traveling through a forest, but they can be beaten if Mario grabs the Green Shell they are using as a ball, leads them to a clearing, and jumps out of the way when they charge at him, causing them all to collide and knock themselves out. In Brain Drain, some Chargin' Chucks are spotted milling about the WMUSH radio station after Iggy Koopa takes it over, and chase Luigi out of the building if he steals some Fungus Up cola from the Synapse Switcher. 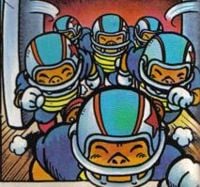 In the Super Mario Adventures comic, several Chargin' Chucks, along with several Thwomps, are summoned by Wendy O. Koopa to attack Mario, Luigi, Princess Toadstool, Toad and Friendly Floyd during the battle in the Koopaling's Tower.

A Chargin' Chuck as it appears in Yoshi's Safari.

In Yoshi's Safari, a Chargin' Chuck, who attacks Mario and Yoshi by throwing bombs while jumping from side-to-side, appears as the boss of Float Castle II.

Chargin' Chucks reappear as enemies in Captain Toad: Treasure Tracker and its Nintendo Switch and Nintendo 3DS ports. They behave the same as in Super Mario 3D World. Chargin' Chucks can be quite devastating, due to needing to be hit twice and constantly putting back on the helmet while Captain Toad is unable to jump on them (although he can fall from a higher ledge onto the Chargin' Chuck). They are more often used to be lured to break Rock Blocks or topple Mud Troopers at a high risk. Tapping Chargin' Chucks on the GamePad makes their helmets temporarily fall off.

“Hey! Those are the goons who dragged us off to prison!”
—Starlow, Mario & Luigi: Paper Jam

They are first seen after Mario, Luigi, and Paper Mario first cross Doop Doop Dunes, where the Chargin' Chuck Corps take them away to the Twinsy Tropics Dungeon under Roy's orders. Later, they are seen again when the trio are traversing Doop Doop Dunes for the second time, where they chase them down before proceeding to battle the group.

In battle, they attack by charging into a brother from the front and behind, which must be avoided using a Jump. Nine of them may also line up three in a row, one in each row will hold an American football briefly, then they will all shuffle at which point the player must keep track of the ones who held the football. They will then throw their footballs at a bro, who must counter them with the hammer. Where the Chargin’ Chuck who held the football was in each row will determine which bro the football will be thrown at: The top Chuck will throw it at Mario, the middle one will throw it at Paper Mario, and the bottom one will throw it at Luigi. When some Chargin' Chucks are defeated, the remaining ones will call for backup; causing more Chucks to appear. They also have a chase sequence, with five of them throwing American footballs at Mario and Luigi who must hold onto Paper Mario in his airplane form to avoid them. The Chargin' Chucks may also throw their American footballs directly at Paper Mario, who must evade them. After a while, the Chargin' Chucks will fall over, allowing Paper Mario to stomp on them all at once. When enough Chargin' Chucks are defeated, they will become enraged and immediately do one last call of reinforcements, maxing out at 16 total. Once defeated, the trio continue back to the Twinsy Tropics Dungeon. The Chargin' Chucks can all be defeated by using the Trio Whirligig Trio Attack.

Chargin' Chucks appear in Mario & Luigi: Superstar Saga + Bowser's Minions, where they are enemies and recruitable allies in Minion Quest: The Search for Bowser. They are melee troopers with high defense and power, and they attack by charging into enemies. Their Special Skill is Air Bash. Chargin' Chucks are weak against Mechakoopas. One is also seen alongside Wendy, a Boomerang Bro, a Bob-omb, and a Koopa Paratroopa, being knocked away by Wendy for interrupting her. Another one's helmet is used to repair the Koopa Cruiser in Joke's End. It is also the first game in which a Chargin Chuck is seen speaking.

A Chargin' Chuck appears in Super Smash Bros. Ultimate as a Novice-class Attack-type primary spirit with one support slot. The spirit simply raises the power of its user without granting them any special effects during battle. In World of Light, the spirit is found south-west on the Light Realm map, on the giant yellow mushroom in the mushroom gorge area. The corresponding spirit battle involves a team of four Warios fought on the Battlefield form of the Super Mario Maker stage, set in Super Mario World style.

An origami Chargin' Chuck in Paper Mario: The Origami King

Chargin' Chucks make their debut in the Paper Mario series in Paper Mario: The Origami King, where origami Chargin' Chucks are enemies. In the game, Mario encounters and fights only a single group of Chargin' Chucks in Shangri-Spa, where three of them are seen occupying the Spring of Purification after Bowser Jr. and his Junior Clown Car are cut into pieces by Scissors. It is also the second game in which they are seen speaking.

A Chargin' Chuck appears as a playable character in Mario Golf: Super Rush, marking his first appearance in the Mario Golf series and his first stand-alone playable appearance overall. He is a Power character with the lowest Spin of any character, tied with King Bob-omb. His Special Shot is Scrimmage Stinger, and his Special Dash is known as End-Zone Dash.

Chargin' Chuck also appears in Golf Adventure mode. He is first seen at the player's house, then he goes to the clubhouse to speak to the Head Coach. He is the first to be called. He is then seen at the Bonny Greens practice area practicing swings. He also appears as a rival along with Boo during Speed Golf in Balmy Dunes.

Chargin' Chuck
Tribe: Turtle clan
Disposition: Headstrong and hot-tempered
Game appearances: World
Chargin' Chuck with a variety of attack patterns
A tough, football-style turtle. It has eight different attack patterns, including rushing and throwing balls, and can be defeated by stomping on it three times, but only one shot is needed if you use a Cape.