“Whaaa?! I had no idea there was a Mega Blooper here!”
—Toad, Super Mario Party

A Big Blooper, also known as Giant Blooper or Mega Blooper, is a giant version of a Blooper that appears throughout the Mario franchise.

In Super Mario Bros.: Peach-hime Kyūshutsu Dai Sakusen!, a giant-sized Bloober appears from underneath an underwater ship that rises after Mario and Kibidango board it. It catches up to them and wraps its arms around the ship. Mario and Kibidango cartoonishly blow onto the sails, making the ship move faster and releasing it from the Bloober's grip, much to its confusion.

In Paper Mario, a large Blooper called a Super Blooper is fought as the last of three sequentially larger Blooper bosses in Toad Town Tunnels. 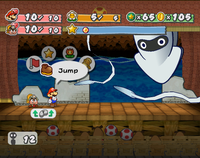 A giant-sized Blooper appears as the prologue's second required boss in Paper Mario: The Thousand-Year Door. One of this Blooper's tentacles is blocking the way to Petal Meadows and Mario has to hit its visible tentacle with his Hammer or jump on it. This makes the Blooper angry, causing it to attack Mario. During battle, it hangs off the ceiling, leaving the player to attack its tentacles, thus making this the first game in which a Blooper's tentacles are referred to as such and fought separately. After both the L. Tentacle and R. Tentacle are defeated, it will fall to the ground and become vulnerable. After the battle, the Blooper starts to squirt itself up to the ceiling and crashes, never seen again in the game.

In Super Paper Mario, a particular Big Blooper appears as a boss in the Tile Pool. It uses its tentacles to attack and can be defeated by having Bowser breathe fire on the red tentacle.

A Big Blooper makes a cameo appearance in Paper Mario: The Origami King. If Mario goes too close to the edges of the Great Sea, a Big Blooper holding a sign comes out of the water and prevents him from going any further. Another one can be fished up on Full Moon Island.

In Mario Party 6, a Giant Blooper makes an appearance in the Blooper Scooper minigame. Here, players have to avoid the whirlpool that the Giant Blooper creates. This Blooper also appears in the "Blooper, Ahoy" and "It Came From the Deep" pages of the Miracle Book. Unlike most Bloopers, which only have stubby arms, the Giant Blooper has at least three long tentacles in this appearance, despite real squid only having two.

A Giant Blooper appears in a pool on the north side of the board Grand Canal in Mario Party 7, where it is seen continuously juggling balls with its tentacles. Upon landing on its Event Space, it juggles four treasure chests containing a Star, five coins, a Dark Star, and nothing, and the player must select one.

While not named as such, a large-sized Blooper appears in Mario Party 9 in a boss minigame, Blooper Barrage.

In Mario Party 10, Mega Blooper is fought at the end of Whimsical Waters, in a castle, in the minigame Mega Blooper's Bubble Battle. Mega Blooper causes bubbles to rise, and these bubbles contain half a picture. In the bottom of the screen, a static picture or more shows the other half. Players must choose the correct half in a bubble to deal damage to Mega Blooper and earn a point. Mega Blooper can disrupt the fight by splashing ink on the screen. At half health, it becomes enraged. It can swim rapidly in a circle to make bubbles more confusing and harder to hit while also spawning Bloopers to attack players that have matched their cards incorrectly. The player who deals the final hit to Mega Blooper earns an additional five points and defeats Mega Blooper.

Mega Blooper reappears in Mario Party: Star Rush again as a boss. Players engage it in any board and at any time, provided they land on the boss space. Mega Blooper is a less aggressive boss in its minigame, Mega Blooper's Bayside Bop. Instead, it plays as a role of a conductor. It summons Bloopers depending on the amount of players participating and it throws a beach ball. The Bloopers hit the beach ball in specific rhythm. The Mega Blooper then throws another beach ball. To earn points, players then have to time hitting these beach balls the same way the Bloopers have done. After they are done, the players randomly shift positions. In the second half of the minigame, the Mega Blooper increases the tempo. The player that deals the last hit to empty the meter earns an additional three points. After the minigame is finished, Mega Blooper finishes conducting and leaves.

Mega Blooper makes an appearance in Super Mario Party as an event character in Megafruit Paradise. When players land on the Event Space, it will attempt to knock players off the bridge and back to the space they came from. They also appear in River Survival in the Blooper Pools route where they attempt to draw the players in with their whirlpool. 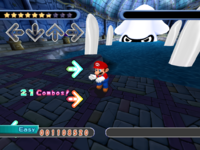 In Dance Dance Revolution: Mario Mix, Big Blooper appears in World 2-4. After entering the whirlpool in the SS Brass, Mario/Luigi and Toad enter a temple which holds the next Music Key. Big Blooper guards it, so Mario/Luigi must face it in a dance-off. During the music, Blooper Bop, mini-Bloopers and Big Blooper's tentacle are additional steps alongside the standard arrows. Missing the mini-Bloopers will cover the bottom of the screen with ink, giving Mario/Luigi less time to see the arrows. Big Blooper's tentacles also rise up from the bottom of the screen at a faster speed that the mini-Blooper, and on harder difficulties, more than one tentacle rise at once. The tentacles must be repelled by stepping on them so the player does not lose points.

In Super Smash Bros. for Nintendo 3DS, a Big Blooper based on the boss from Paper Mario: The Thousand-Year Door appears in the background of the Paper Mario stage when it changes to the S.S. Flavion. It rocks the boat around, but does not cause any direct damage to fighters.

In Super Smash Bros. Ultimate, the Big Blooper returns on the Paper Mario stage with the same role as it did previously. Proportionally, it now resembles the contemporary Blooper design rather than the design from Paper Mario: The Thousand-Year Door.

Goombella can use Tattle only on Blooper's exposed tentacle in Rogueport Sewers before Mario whacks it with his hammer.