“Now this is a DK Space. Land on it and Donkey Kong will show up and do something good for you!”
—MC Ballyhoo, Mario Party 8

DK Spaces are spaces in the Mario Party series, in which if a character lands on one, Donkey Kong shows up and causes a positive effect. DK Spaces mainly serve as a counter to Bowser Spaces. Many show either Donkey Kong's mugshot (facing sideways or directly forwards) or the DK symbol.

The space first appears in Mario Party 5, which is also the first Mario Party game where Donkey Kong leaves the playable roster until his appearance in Mario Party 10 where he returns as a fully playable character. Only one DK space appears on each board, and it is placed on any existing blue space at the start of the board. Landing triggers of three events:

In Mario Party 6, more DK Spaces are placed on the board, but they are only around during the day, as they are replaced with Bowser Spaces at night. The DK Roulette event from Mario Party 5 has been removed. However, the player now has a chance of gaining a Star from the DK Bonus event (returning from Mario Party 5). The DK Bonus now involves a Dice Block shaped like a barrel called a "Dice Barrel", and in addition to displaying a Star, the event has a higher coin output in general. In the DK Minigames, this works the same as it does from the previous installment.

There are no DK Spaces or Bowser Spaces in Clockwork Castle despite Donkey Kong and Bowser appearing on the board. Additionally, this is the only game where DK Spaces are orange instead of blue and the last one to use DK's face as the space's emblem.

In Mario Party 7, only the DK Minigame event appears. Players can only earn their prizes from the DK Spaces by minigames alone. In this game, there are two types of Minigames — single-player and multiplayer. In single-player, players have to beat Donkey Kong to the goal in order to earn 20 coins, 30 coins, or even a Star (10 coins in Solo Cruise). However, the exception is Windmillville where it can only be 20 or 30 coins for single-player. Multiplayer works the same as it did in the last two installments. 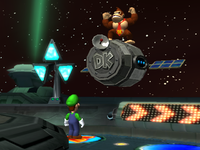 Luigi landing on the DK Space in Bowser's Warped Orbit, where Donkey Kong will give him a free star.

In Mario Party 8, whenever someone lands on the space, Donkey Kong appears to do something helpful, with a different method for each board, usually the opposite of whatever that board's Bowser Space will do. In this game, the DK Space alternates with the Bowser Space, meaning that when one lands on the DK Space, after the event is over, it will be replaced with a Bowser Space and vice-versa. Also, the shape of the space is different with each board, including the tutorial. This time around, all three of the DK events from the previous three installments are gone (the DK Roulette, DK Bonus, and DK Minigame).

Donkey Kong does the following on each board:

In Mario Party 9, DK Spaces appear only on the board DK's Jungle Ruins. When landed upon, the Bananas and Z-Bananas rotate around the stage in an event called Banana Spin Wheel. The bananas rotate until the captain presses

. When this happens, the captain can keep any bananas that flies past after the rotation is stopped.