“Welcome to Neon Heights! This is the place where dreams are made...and broken! I say! Welcome to Neon Heights! Here you'll find Stars inside the treasure chests. There are 3 chests scattered around the board, but only 1 of them has a Star. If you pay Koopa Kid 10 coins, he'll open the chest for you. Hmm...I don't trust that at all... If someone finds the Star, it will move to a new chest. Then you must search anew. Do watch out, however! Sometimes Bowser will take a Star during Bowser Time. If that happens, play games on the board and collect coins so you can get it back!”
—Toadsworth, Mario Party 7

Neon Heights is an American-themed board in Mario Party 7 set atop a skyscraper complex. It is largely based on Las Vegas, Nevada, and to a lesser extent, Hollywood, California; Cape Canaveral, Florida; and New York City. It is complete with a theatre district, a movie set, a space center, and a baseball diamond. There is also a Mario statue that resembles the Statue of Liberty. Here, Shy Guys are in charge of the attractions, while Top Hat Shy Guys are in charge of the Orb Shops. On this board, there are three Treasure Chests, which appear in random spaces. If a player reaches a chest, Koopa Kid offers to open it for 10 coins. One chest contains a Star, another 20 coins, and the other one contains a Bob-omb, which blasts the player back to the start. Once the Star has been purchased, three new chests appear.

This board may have been under secret control of Bowser, because he and Koopa Kid claim that the chests and Stars belong to him. Additionally, there is a toll gate, where Koopa Kid stops players to ask them to pay 10 coins to take the path he is blocking.

In Solo Cruise, players have to beat their opponent by getting three out the five Stars that are in five of the eight chests on the board (three of them have Bob-ombs) first by having Koopa Kid open them for a price. However, Koopa Kid always charges 5 more coins for every chest he opened (5 coins to 40 coins). 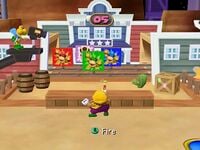 When Bowser Time comes along, Bowser does one of four actions: