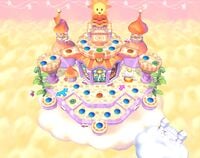 The Rainbow Dream in Story Mode

Rainbow Dream is a board map from the Dream Depot in Mario Party 5. Suspended above the clouds with a backdrop of a pink, starry sky, the dream is based on the four main types of weather: cloudy, rainy, sunny, and snowy.

Rainbow Dream is comprised of five independently floating clouds - one for each type of weather, and a fifth that serves as the start space. The main way of getting around the board is by getting to the "rainbow spaces." Whenever players got to one of them, Klevar asks them if they want to cross the rainbow bridge for 5 coins. If paid, a rainbow appears for them to go to the next area. Additionally, there is a "wind gondola" that can be used if a player lands on one of four ? Spaces located near it, which will take the player to one of the other islands (chosen randomly). There are four other ? Spaces — one on each cloud (not counting the ones that activate the gondola). The ? Space near the generator gives players a chance to get some Capsules by tapping the

button to run faster on the battery wheel. Landing on the ? Space in the rainy area sends the player (and the players on the two spaces next to it) on a current that takes them back to start. The ? Space on the sunny area makes three rainbows appear. The player chooses one, then slides down to the area the rainbow led, potentially collecting coins along the way. Finally, the ? Space at the snowy area gives players a chance to win coins by ground pounding the see-saw a snowman is on to lift it as high they can. The snowman then comes back down, sending the player upwards where the coins are. The harder the ground pound, the higher the jump, and the more coins they win.