“Welcome to the Bowser Nightmare! This is a world inspired by Bowser's wicked dreams! Big bad Bowser put all kinds of traps and snares around, so be careful!”
—Eldstar, Mario Party 5 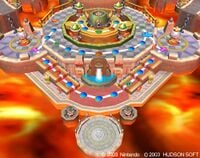 Bowser Nightmare is the largest, unlockable board in Mario Party 5, and the seventh and final board of the game. It was created from Bowser's dreams. It is first playable in a simplified variation in Story Mode. If the player defeats Bowser in Frightmare, the full version of Bowser Nightmare becomes playable in Party Mode.

When players land on ? Spaces, Bowser appears and causes events that may hinder them.