Frightmare is the last minigame in Mario Party 5. Its name is a portmanteau of "fright" and "nightmare."

The minigame has four phases. First, fire-breathing Mechakoopas appear. They need to be destroyed by either stomping on their heads or throwing them within 60 seconds. If they are breathing fire, they hurt the player if stomped or if the player tries picking them up, but they can be stomped or picked up if they are charging up.

After the Mechakoopas are destroyed, Bowser sends three fire rings, and the player must avoid them for 30 seconds. If the player is successful in dodging the rings, Bowser fights the player. The rings change their size and can even overlap each other.

Bowser can charge at the player, breathe fire while walking around, and try to stomp the player. To dodge this, the player must get out of the way when he jumps through the air. When he lands, he cracks a tile. After a tile cracks three times, both characters are sent plummeting to the final area. When Bowser first jumps to the stage, the middle tile gets cracked, so this tile needs to be landed on only twice. Bowser then drinks a potion and grows to ten times his normal size, but this makes the floor collapse beneath him, causing him to be wedged due to the building's structure. 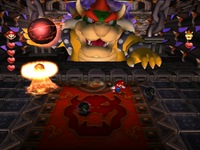 The final phase of the fight

After commenting that he is stuck and taunting the player, Bowser throws fiery red orbs (which unleash small waves of lava after they hit the ground and leave a small black core behind), breathes a huge stream of fire, and then sends out an electric purple orb, which gives off a shockwave that can destroy the orbs leftover from the first attack. When the orbs are heated up by his breath, they turn into spheres of light, and the player has to pick one up and hit Bowser's face with it to damage him. After Bowser is hit five times, he breaks through the structure and gets sucked into the background vortex, defeating him.