It has been requested that this article be rewritten and expanded to include more information. Reason: add info of what Bowser/Koopa Kid does, and detail what happens if more than one player is tied for last place when there is one star card left

Card Party is a side-game from Mario Party 5. It is very similar to the main game, however in the form of a card game. Hosted by Mamar (in charge of Bonus Mode), this board is entirely made up of cards, with character game pieces instead of actual characters. The first thing that players do is choose the size of the board (7x7, 8x8, 9x9, or 10x10). Then, the player can select their character they want to play with. They can play with the following characters:

CPU players pick their own characters. Next, the order of play is chosen by picking cards numbered 1, 2, 3, and 4. The player that picks 1 is first, and so on. When this is done, players choose where to start on the board. Once the game starts, each player rolls the dice (which are not to be confused with the standard Dice Block) and moves a certain number of spaces. As they go turning cards over, they can pick which direction they want to go. When a new card is turned over, it reveals a Path Card, Item Card, Event Card, Bowser Card, or Star Card.

These cards simply open a pathway for players to continue traveling. This is where they choose which direction they want to go, depending on which way the path went. It is always best to head toward the Star cards, as the winner is determined by the number of Stars. Sometimes, another die is revealed from under a Path Card, letting the player roll it and adding the number rolled to the current number of spaces left. 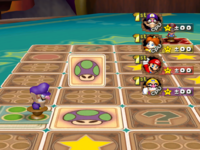 Waluigi about to get a cursed mushroom.

These cards give useful items that can be used by pushing

at the beginning of the player's turn. The items used are taken from the main game and have similar effects.

Cursed Mushroom
The user spins a Cursed Mushroom wheel to determine which opponent takes the curse, bringing their maximum die roll down to three.

Warp Pipe
Using this card turns one card into a four-way junction and reveals all the Path Cards around it. 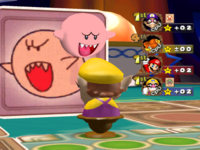 These cards bring an unexpected event that can be good or bad.

Switch Places
The player trades places with a random opponent and ends their turn.

Send Away
The player gets sent to a random space on the board and ends their turn.

Boo
This summons Boo to steal a Star Card (regardless of what kind) from another player and gives it to the player.

Red Boo
Summons an angry red Boo that steals the player's Star Card (regardless of what kind) and gives it to someone else.

Black Hole
Sends a player back to Start and ends their turn.

This card has the same background as Path Cards, and are randomly placed on the board. When this card is turned over, Bowser or Koopa Kid appear to cause trouble. Bowser may trigger one of these events:

If Koopa Kid appears, he gives that player a cursed mushroom and ends their turn, or sometimes he calls Bowser to cause trouble. 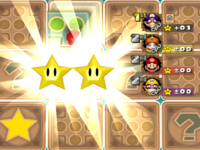 Mario about to win two stars.

These all look the same from the top side, but once they are flipped over, there are three possibilities:

Star Card
Worth one Star. The card has a chance of transforming into a Ztar Card. In that case, the Star shakes and then it explodes, uncovering the Ztar.

Ztar Card
Worth -1 Star (it is possible to have a negative number of Stars). The card has a chance of transforming into a Star Card. In that case, the Ztar covers the Star.

If a player is in 4th place when there's only one Star Card left in the game, one of those events can happen. Once the event is done, normal gameplay resumes.

Star Chance
The fourth place player rolls two green dice with a Star in one of each of their faces; if the player gets either or both Star faces, the player gets a Star or two.

Dice Bonus
Adds one more die to the player in last place. If a Mushroom Card is used, then they roll three dice.

Stop Time
The player rolls the die and the number on the die becomes the number of turns that the player has to move. Only the last place player moves during that event.

At the end of the game, the player with the most Stars wins. If there is a tie, players then have to play a tie-breaker game to determine the winner. Eight cards are placed facing down, and players take turns choosing cards until one player reveals the Star Card. This player is then declared the winner.