Random Ride is a Battle minigame found in Mario Party 5. 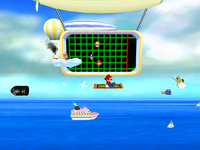 The minigame is mostly luck-based. The audience consists of Goombas and Koopa Troopas sitting on pink and yellow bleachers. According to the Koopa Troopa (host), each player has to pick a name from a list of competitors for a race (randomized). Generally, the more positive a machine's name, the better the chance that a player will win the race. When this minigame is played in a Battle Royal board game, the player in last place picks their machine first, with the player in first place picking last; in Free Play mode or Team Match, the players pick their machines in a random order. Players who choose early gain an advantage, and vice versa.

The possible names for the machines include the following:

After everyone has chosen their machine, a race plays by itself. The competitors soar across the ocean; they pass through blue-, pink-, yellow-, and orange-striped hot air balloons with Whomps, Shy Guys, Goombas, and Koopa Troopas cheering for them. Players get eliminated throughout the race through various misfortunes, such as engine blowouts or collisions with Banzai Bills. Eventually, one player is left; that player is declared the winner.