The object of this game is to clean the buses' roofs after a Shy Guy spills a can of green paint on them. The teams must work together to cover the most area and clean their buses. The first team to completely do so wins. If time runs out, the team that got the higher percentage clean wins.

The camera changes angle to the winners, who do their victory dances while their bus sparkles. At the same time, the losers sulk. 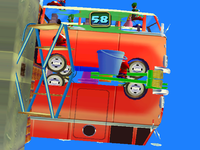 The reflections in question