This article is about the minigame in Mario Party 5. For the enemy, see Bill Blaster. 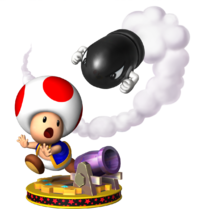 Official artwork of a Bullet Bill from the minigame chasing Toad

The camera shows Bullet Bills being transported along the conveyor belts to one of the cannons. It then shows the view used in the minigame, and the platforms begin rotating as the minigame starts.

The ultimate goal of the game is to defeat all the opposing players by shooting Bullet Bills at them. Each player is positioned in one of the screen's corners, and each is on a spinning platform. In front of the player is a Bill Blaster. Because the platform rotates constantly, players must time each shot so that they hit the intended opponent. When a player is hit, that player's platform rotates slower, making it easier to aim. After the player presses

to fire, the platform stops spinning for a moment, but the player cannot shoot again for several seconds. If two Bullet Bills collide with each other, they both explode in mid-flight. Each player can take three hits until they are eliminated. The last player remaining wins. If all four players survive for a certain amount of time, the game ends in a draw.

The winner's platform moves to the center of the arena. The winner then strikes a victory pose.