In Mario Party, Lava Bubbles start to appear, one by one, until the two large ones appear at the sides, causing all the smaller Lava Bubbles to jump into their rope formation.

In Mario Party 2 and Superstars, the small Lava Bubbles circle around another small one until the two larger ones appear, after which the smaller Lava Bubbles jump into their rope formation. In these games, the Lava Bubbles start off blue before turning orange after the first five jumps. 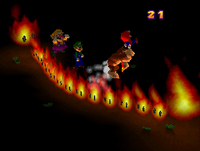 Characters jump over a jump rope made of flaming hot Lava Bubbles. The height of the jump depends on how long the player holds down

In Mario Party 2, the game softlocks after approximately 1,000 jumps.

In Mario Party Superstars, the Lava Bubbles are designed like in previous Mario Party installments, and the minigame ends if two or more players reach 99 jumps. Additionally, an "Endless" mode is available in Free Play; as the name implies, it continues until everyone is burned or until after 9,999 jumps, and it saves records.

In Mario Party 2 and Superstars, if one player successfully jumps the rope while the other players are burned, that player does a winning pose.