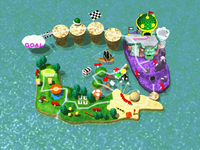 Mini-Game Island is an island located on the outskirts of Mushroom Village in Mario Party. To get there, the player must use the raft in Mushroom Village. The goal of the island is to clear all 50 minigames, although the character can reach the end by taking shortcuts. Each minigame has a quota the player must reach; the player starts out with four lives and loses a life every time they fail a minigame. Coins are won after each minigame is complete. Collecting 100 Coins or completing a minigame for the first time grants the character an extra life. At World 9, Fwoosh can take the character to start if they want to.

There are many different paths the player can take to get through Mini-Game Island to the end, as follows.