“But then all DK Spaces will turn into Bowser Spaces! Which is bad luck for the next one to stop on such spots! Bowser only brings misfortune!”
—MC Ballyhoo, Mario Party 8

Bowser Spaces are a recurring type of space in the Mario Party series. When players land on one, they cause Bowser to appear and cause a major negative or otherwise game-altering event for the player who landed on the space, but this event can directly affect other players as well. These events range from characters competing in minigames where losing carries the penalty of losing Coins and Stars to shuffling all characters' positions, as well as merely stealing characters' Coins and Stars with no provocation. Bowser Spaces tend to be fairly rare, with one to five on each board by default, but certain in-game events can often increase the number present. In all games that use the players' status panels to determine the type of minigame played, Bowser Spaces color the player's panel red, the same color as a Red Space.

In Super Mario Party, it is replaced by the Bad Luck Space, due to Bowser becoming a fully playable character for the game. 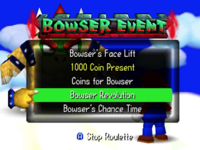 In the first Mario Party, Bowser makes the player do one of his events via roulette. His events are the following:

1 - The amount of coins taken ranges from 10-50, and usually correlates with the current turn number.
2 - In the 1 vs. 3 games, whoever lands on the Bowser Space is always the single player.
3 - If a tie occurs then everyone loses the same amount of coins. This is similar to Bowser's Coin Potluck from Mario Party 2 and 3. However, if everybody wins, Bowser will take coins from the player who triggered Bowser Space.


If the player has at least one Star, but no Coins, Bowser gives them 10 coins in exchange for 1 Star.


If the player has no Coins or Stars, Bowser gives them 20 Coins.

Aesthetically, the player encounters Bowser in the same background used for other character encounters in Mario Party such as Toad, Boo, and Koopa. 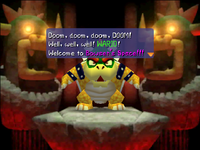 In Mario Party 2, the minigame events from the previous game were removed, while four new events were added. They include the following:

Aesthetically, Bowser now appears in a Bowser's Castle-like background, without the player being directly visible.

If the player has no coins, Bowser will give them 10 coins. 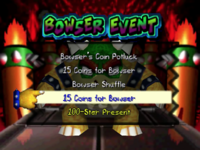 If a player lands on a Bowser Space without any coins, Bowser will pay them 20-50 coins and will not trigger an event. Unlike the first Mario Party, no stars are lost if the player possesses any when this happens.

The Bowser Phone will make a chosen player visit Bowser as if they landed on a Bowser Space.

In Mario Party 4, the Bowser Space is significantly reworked compared to the previous games. Usually, a Koopa Kid will appear in Bowser's place, hanging from a balloon and stealing 10-30 Coins (in increments of 5) from either the player who landed on the space, or (less commonly) all four players. This works similarly to the Coins for Bowser and Bowser's Coin Potluck events from previous games.

More rarely, Bowser himself appears, flattening the player who landed on the space and any others standing there. One of several named events is then activated like in previous games, but Bowser now decides the event himself, instead of picking from a roulette. The following four events may be selected by Bowser, three of which return from Mario Party 3:

Sometimes, when Koopa Kid is about to leave after taking coins, he will call for Bowser, causing Bowser to start an event immediately afterwards.

If Koopa Kid appears when the player has no coins, he will give them 10 coins. Bowser, however, will start an event regardless of the player's number of coins.

Aesthetically, the screen now darkens and a flashing Bowser silhouette accompanied by Bowser's laugh now appears when the player lands on a Bowser Space, followed by Koopa Kid or Bowser's arrival.

In Mario Party 5, the Bowser Suit event is removed and Koopa Kid no longer appears to take Coins from the player, while one new event is added.

Sometimes, before Bowser declares an event, Donkey Kong appears and punches Bowser. Bowser then blames Donkey Kong for ruining the event, and then steals 10 or 20 Coins from the player. This can only occur if the next space in the path is level with the Bowser Space, since Donkey Kong initially appears on the next space before jumping down to face Bowser.[1]

If a player lands on a Bowser Space and does not have any coins, Bowser gives them 10 coins.

In this game, only one Bowser Space appears on each board, and is placed on any red space at the start of the board, rather than having constant locations on each board. If a player receives a Bowser Capsule, Bowser will appear and turn a Red Space into another Bowser Space. Also, during the Last Five Turns Event, one of the roulette events will turn all Red Spaces into Bowser Spaces.

In Mario Party 6, Bowser Spaces only appear during the night in Party Mode, replaced by DK Spaces during the day. The Bowser Revolution and Bowser Shuffle are removed from the event rotation, Donkey Kong no longer appears to punch Bowser, and no new events were added, leaving only the following two events:

There are no Bowser Spaces or DK Spaces in Clockwork Castle.

In Solo Mode, Bowser Spaces always activate the same event – Bowser's Mini-Game, in which Bowser forces the player to play a 4-Player, 1 vs. 3, or 2 vs. 2 mini-game against the colored Koopa Kids. If the player wins, Bowser gives them the mini-game played and 10 Coins, while losing causes Bowser to take all of the player's Coins or mini-games.

Additionally, the Bowser Revolution event from previous games can now occur during the Last Five Turns Event, despite no longer occurring on the Bowser Space.

If the player has no coins when landing on a Bowser Space, Bowser gives them 10 coins.

In Mario Party 7, the Bowser Bonus is removed, leaving only the Bowser Mini-Game, which is now divided into two events:

Multiplayer Bowser Mini-Games do not occur during Solo Mode, due to requiring four players. Additionally, Bowser steals stars instead of orbs from players who lose in minigames.

Mario Party 7 also introduces Koopa Kid Spaces, which have a similar effect to Bowser Spaces from the earlier titles, including events similar to the Bowser Revolution and Bowser Shuffle.

Aesthetically, the flashing Bowser silhouette remains from previous games, but the player is now dropped into a hole and sent to the board's Start Space where they encounter Bowser, as opposed to Bowser flattening the player.

No Bowser Spaces appear in Bowser's Enchanted Inferno!, though they still appear on the board results screen.

If the player has no coins, Bowser will give them 10 coins and will not start a Bowser minigame.

During the Last Four Turns Event on Pagoda Peak, Neon Heights, and Windmillville, one of the roulette events will turn all Red Spaces into Bowser Spaces.

In Mario Party 8, all DK Spaces are replaced with Bowser Spaces when someone lands on a DK Space, and vice versa. Bowser now performs events specific to each board, which are in some way the inverse of what happens on DK Spaces and can be considered harmful to the player. The following events occur on each board:

In King Boo's Haunted Hideaway and Shy Guy's Perplex Express, Bowser's theme continues playing throughout the match until a player reaches Bowser or lands on a DK Space.

No Bowser Spaces appear in Bowser's Pinball Machine, though they still appear on the board results screen.

Bowser Spaces return in Mario Party 9, where they are usually put on by Bowser as a "gift" for the captain after the players reach Green Toad. Bowser will ask if the captain wants "a whole bunch of" gifts. If the captain is a CPU player, they will always answer yes, resulting in slightly more Bowser Spaces. When a Bowser Space is landed on a board, Bowser activates a roulette, and one of the following events initiates:

The Reverse and Battle Minigames qualify as Bowser Minigames due to the normal rules & Mini Star distribution changed from Bowser.

Because most of these events have positive effects to the player in the last place, the yellow Toad may suggest that landing on a Bowser Space can be a good idea if the captain is in last place and is far behind other players.

In Mario Party: Island Tour, the Bowser Spaces appear in some boards, not all. If a player lands on one (or if playing in Bowser's Tower and the player and Green Toad encounter him on a floor), Bowser activates a roulette with four or five options.

The following do not have a serious effect:

Something similar happens when a player gets a Bowser Penalty.

Nothing happens if any of the following is selected:

In Mario Party 10, Bowser Spaces visually emit a purplish smog, and landing on one triggers a roulette that can cause havoc to the player. The roulette recycles events from Mario Party 9. In amiibo Party, coins and Stars can be lost. In this game, however, Bowser no longer helps the player if they are in last place (with some exceptions). Also, Bowser Spaces only appear if the player frees Bowser before reaching the homestretch, except in Chaos Castle. Additionally, unlike Mario Party 9 and Mario Party: Island Tour, the Bowser Roulette now stops on an event by itself; the player who landed on the Bowser Space does not get to stop the roulette.

There is one Bowser Space located on the upper-right section of each board at the start of an amiibo Party game, this can only be changed with the Bowser Space Roulette, which can turn Red Spaces into them or the opposite. If Bowser stops on a Bowser Space, he will obtain a certain number of coins, a Star, or a Special Dice Block depending on the event.

In Mario Party Superstars, landing on a Bowser Space has the same sound effect as when landing on a Bad Luck Space in Super Mario Party. The number of options displayed at once is six in the first half of the match and seven or eight in the second half, and the player that landed on it must press

to stop the roulette so that one of the following events (returning from Mario Party, Mario Party 2, and Mario Party 3) is randomly selected:

4 - This event only appears in the second half of the match.


If the player is in last place regardless of whether or not they have any coins or stars to lose, Bowser may give them 10 coins instead.

The Bowser Space, using its appearance from Mario Party 6, appears in Super Smash Bros. Brawl as a Sticker, but it is renamed Bowser Coin for unknown reasons.