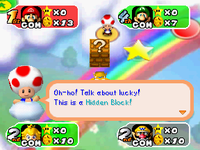 Hidden Blocks are a game mechanic in the Mario Party series that first appeared in Mario Party 2, though a similar mechanic appeared in Mario Party as well. Hidden Blocks are invisible blocks that may rarely appear when the player lands on a Blue Space. When broken by the player who finds one, they typically contain a large number of coins or a Star, among other possible contents. Hidden Blocks' appearance changes with each game, sometimes resembling Brick Blocks, other times looking more like a small treasure chest.

In all Mario Party games with a toggle-able "bonus" option that controls the presence of Bonus Stars, turning this off also prevents Hidden Blocks from appearing randomly.[1]

While proper Hidden Blocks do not appear in Mario Party, the Event Block purchasable in the Mushroom Shop plays a very similar role, and is referred to as a "Hidden Block" in-game when it is activated. Like Hidden Blocks in later games in the series, an Event Block may appear rarely when a player lands on a Blue Space, though they may also appear when a player lands on a Red Space. The Event Block resembles a classic Brick Block with a white question mark on top, and is broken by the player after being found. When broken, it activates an event with Boo, Koopa Troopa, or Bowser. Koopa Troopa gives the player 20 coins, Boo allows them to steal coins or Stars, and Bowser takes 20 coins from the player.

Hidden Blocks made their proper debut in Mario Party 2. In this game, they appear identical to the Event Block from Mario Party: a classic Brick Block with a question mark on top. At the beginning of a Party Mode game, two Hidden Blocks are placed on random Blue Spaces somewhere on the board, one containing twenty coins and the other containing a Star. When a player lands on one of these spaces, they activate the Hidden Block, and subsequently break it, gaining the coins or Star hidden inside. Afterwards, a Hidden Block with the same contents is placed on another random Blue Space, while the other remains in place until found. Hidden Blocks are never placed on Blue Spaces that can potentially be the Star Space.[1]

Hidden Blocks reappear in Mario Party 3, behaving in largely the same way as in Mario Party 2, though with a new appearance: as a stylized purple block with an orange question mark on its front. In addition to the two Hidden Blocks containing twenty coins and a star, respectively, a third is now always present on the board, which contains a random item that varies each time a player finds a Hidden Block containing an item. This item can only be a Skeleton Key (72% of the time), a Magic Lamp (8% of the time), or one of the four rare items (5% of the time each): a Lucky Charm, a Koopa Kard, a Wacky Watch, or a Barter Box.[1]

In the Battle Royale tutorial sequence, Mario is shown collecting a Mushroom from a Hidden Block, but this is not actually possible in-game.

In Mario Party 4, Hidden Blocks behave largely the same as in the previous titles, but there is now only one Hidden Block on the board at any given time, which has a 50/50 chance of containing either twenty coins or a Star each time one is found. Items do not appear in Hidden Blocks.[1] They have also received another change to their appearance, now resembling a golden treasure chest with a red question mark on its lid.

In Mario Party 5, like in Mario Party 4, only one Hidden Block appears on the board at a time. However, these Hidden Blocks, referred to generically as hidden blocks, always contain only ten coins, and now resemble Brick Blocks with white edges and a golden question mark on its front. Additionally, hidden blocks can be moved (invisibly to the players) if a Capsule is thrown onto a space that contains a hidden block. In this case, the hidden block is a moved to a random Blue Space that does not have a Capsule placed on it. Hidden blocks can appear on Blue Spaces that can potentially be Star Spaces, but if that space becomes a Star Space, the hidden block is also moved to a new location that does not have a Capsule placed on it. If a hidden block is found on the last remaining Blue Space on a board that otherwise has all of its Blue Spaces occupied with Capsules, or if all Blue Spaces on a board are occupied with Capsules, hidden blocks will no longer appear for the remainder of the game, even if a viable Blue Space becomes available.[1]

The Coin Block Capsule that appears in this game allows the player to summon a Hidden Block of sorts when used or landed on. The resulting block looks identical to a hidden block and contains ten coins, but it is called a "coin block" instead, and it is not placed randomly.

Hidden Blocks reappear in Mario Party DS. There is one Hidden Block placed on a random Blue Space somewhere on the board at all times. They have five possible contents: a number of coins determined by how fast the player can mash

Before hitting the Hidden Block in Mario Party DS, it is possible for the player to find out if it contains a Star (or Ztar) or coins. If the block appears right when the player lands on the space, the block holds coins. If the block appears later, it contains a Star or Ztar. Another way the game indicates this is through the camera. The block will contain a Star or Ztar if the camera zooms in before the game tells the player to tap/press

repeatedly. If the camera does not zoom in quickly, the block contains coins.

In Super Mario Party, Hidden Blocks appear as plain golden Brick Blocks, similar to Gold Blocks. When found, they contain between 4 and 15 coins randomly, or a Star. Whether the block contains coins or a Star is determined by a roulette wheel that is spun when the Hidden Block is found, which has a small section that causes a Star to be granted, the rest of the wheel causing it to grant coins. The part of the roulette that grants the Star can apparently only be landed on past the halfway point of the game. In Mario Party mode, two Hidden Blocks (each containing the same possible contents) are present on random Blue Spaces on the board at all times.

The Hidden Block Card item summons a Hidden Block to the player's location immediately after being used. Unlike Mario Party DS' Block Sensor, this Hidden Block is not one of the two hidden on the board normally, and does not affect their locations in any way.

In Partner Party mode, two Hidden Blocks appear on random spaces at all times. The player's controller rumbles when one is passed by.[1]

Hidden Blocks reappear in Mario Party Superstars, once again parsed as "hidden blocks" and using the same appearance as in Super Mario Party. They may contain coins or a Star and no longer use the roulette mechanic from Super Mario Party. However, players placing lower or those further behind the leader generally have a better chance of getting a Star from a Hidden Block.