Not to be confused with Dark Star.

“I'll give you a Ztar star because you're so lucky!”
—Bowser, Mario Party 5

Ztars, also known as Shadow Stars in Mario Party 6, Dark Stars in the North American version of Mario Party 7, and Z-Stars in the PAL versions of Mario Party 7, are black counterparts to Stars found exclusively within the Mario Party series. They serve various functions from game to game but usually take away one Star from the player's possession. The Ztars' name comes from a corruption of "Star" and is spelled with a "z" instead of an "s." "Z" can be interpreted as a backwards "s," referencing how Ztars are meant to be the opposite of Stars.

Bowser giving a Ztar to Mario

The first appearance of Ztars was in the first installment of the Mario Party series, Mario Party, where they are the bogus item for Mario's Rainbow Castle. They appear as black stars with white eyes. Bowser forces the player to buy a Ztar for 40 Coins, but it does not have an effect on the player's Star count. Upon the player purchasing it, the usual Star acquisition fanfare plays but becomes darker-toned at the end. This is Bowser's most expensive bogus item in the game.

Ztars next appear in Mario Party 2 during the "Bowser's Multiplying Toads" event. If a player lands on a Bowser Space and triggers this event, Bowser makes two Toads appear on the board: One is real, and the other is really a Baby Bowser in disguise. Each Toad offers to sell the player a Star for 20 Coins. While the real Toad sells the player a genuine Star, the fake Toad actually sells the player a Ztar, then reveals himself as Baby Bowser. Like in the first game, Ztars do not affect the player's Star total, and they serve only to waste their Coins. To find the real Toad, the player needs to either be lucky or use one of two items: the first is a Magic Lamp which will always bring them to the real Toad, while the second is a Bowser Bomb which, when used at the end of the turn, causes the fake Toad to reveal himself.

Ztars make a cameo appearance in Mario Party 3 in the minigame Cosmic Coaster. The star on the goal looks like a Ztar until a team reaches it, at which point it changes to look like a Star and starts rocking from side to side. If a team is close to the goal but loses the minigame, it remains a Ztar and can be seen falling slightly askew. 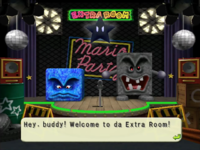 In Mario Party 4, Ztars make a few cameos in the Extra Room. A Ztar can be seen flying under the boards in Mega Board Mayhem and Mini Board Mad-Dash from Thwomp's Backroom Ball. Also, after every mini-game has been unlocked, a Ztar appears in the Extra Room. Selecting it starts Beach Volley Folly, which the Ztar hosts.

From this game forward in the series, the Ztar's eyes look mad.

If a player lands on a Bowser Space in Mario Party 5 and has at least one Star, Bowser occasionally gives the player a Ztar, which subtracts one Star from the player's current total. In Card Party, players can uncover a Ztar Star Card that has the same effect but can make their Star count go below zero. Ztar Star Cards are hidden within Star Cards, so it is based purely on chance whether the player receives a Ztar or a Star. Additionally, some Star Cards transform into Ztar Star Cards after being revealed and vice versa.

In Super Duel Mode, a Ztar can be seen as the power source for the Ztar Engine engine part. 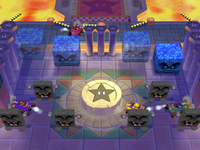 Shadow Stars also make minor cameos in the comparison quiz section of Speak Up and on the floor in Tricky Tires. 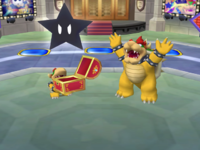 In Mario Party 7, Ztars are renamed Dark Stars (or Z-Stars in PAL versions), but they still have the same effect. At one of the Green Spaces in Grand Canal, the player must choose a chest from a group after the chests have been shuffled by a Blooper. One of the chests holds a Dark Star. If the player chooses this chest, they must take it. In Neon Heights during Bowser Time, Bowser sometimes puts a Dark Star in one of the chests. If the player pays Koopa Kid for this chest, they are forced to take the Dark Star inside. Unlike in Mario Party 6, if the player has no Stars, they will not lose 20 coins.

A Ztar in Mario Party DS

In Mario Party DS, Ztars are once again so called, and they occasionally appear in Hidden Blocks. If a player is unfortunate enough to get a Ztar, they lose one Star. Also, a figure called Ztar appears at the same time the Star figure appears.

Although Ztars do not appear in Mario Party 9, Mario Party 10, or Mario Party: Island Tour, Mini Ztars appear in those three games, where they deduct from the current number of Mini Stars a player has.