“AY-O! Did ya see that? Those Prankster Comets were green! That means there are Green Stars around now! Those must be the cosmic jewels I keep hearing about! Those Green Stars are pretty hard to find, so keep your eyes and ears peeled! Take it away, Captain!”
—Lubba, Super Mario Galaxy 2 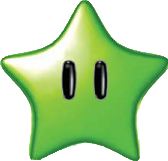 In Super Mario Galaxy, there are only three Green Stars, each of which is hidden away in a different galaxy. Collecting all three of them grants Mario access to the three Trial Galaxies on the Planet of Trials: the Rolling Gizmo Galaxy, the Loopdeeswoop Galaxy, and the Bubble Blast Galaxy.

“The Green Star Challenge Is On!”
—Save file description, Super Mario Galaxy 2

Mario near a Green Star in World 6-1.

Green Stars serve as the main collectible items in Super Mario 3D World and the Super Mario 3D World mode of Super Mario 3D World + Bowser's Fury. They function similarly to Star Medals from Super Mario 3D Land, and by extension, Star Coins from the New Super Mario Bros. games, and share the same sound effects as the former. All the regular courses have three of them, Enemy Battles have one, Captain Toad courses have five, and there can be five, ten, or thirty Green Stars in the Mystery Houses. In Enemy Battles, the player needs to defeat all the enemies to receive the Green Star. In main courses, they are scattered around in hidden areas just like Star Medals. In Captain Toad's Adventures levels, the objective is to solve the course's puzzles and to obtain all five Green Stars. In Mystery Houses, the player needs to complete one of the ten-second challenges to receive one. There are 380 Green Stars in total, and each of them additionally grants the player 4000 points. Some levels on the World Map require the player to have a certain number of Green Stars to play the level and advance past it.

Green Stars also appear exclusively in the Wii U version of Captain Toad: Treasure Tracker. After the end credits, a Green Star is falling across the sky that Captain Toad chases after. The star falls down the Clear Pipe leading to the Sprixie Kingdom from Super Mario 3D World which Captain Toad also enters. Green Stars also appear in the Super Mario 3D World levels in the Bonus Episode; however, instead of functioning like Super Gems (the equivalent item in the game), they replace Power Stars from regular levels at the end of a level, similar to the Super Mario Galaxy games.

The Green Star in the ending is replaced by the Odyssey in the Nintendo 3DS and Nintendo Switch versions to reflect the Bonus Episode this time being based on Super Mario Odyssey.