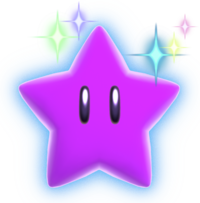 The Boost Star is purple on the GamePad. Onscreen, it cannot be activated by any character and is almost invisible, with a slight blue outline.