It has been suggested that this page be moved to red ring. (discuss)

Red Rings[1] (also parsed as red rings),[2] also known as red-coin rings,[3] are objects present in the Super Mario series. They first appeared in New Super Mario Bros., and when Mario or Luigi jumps through a Red Ring, it will make several Red Coins appear, but only for a limited time. In most games, eight Red Coins will appear, while in Super Mario 3D Land and Super Mario Run, there will be only five. The prize for collecting them all always depends on what form the player is in. 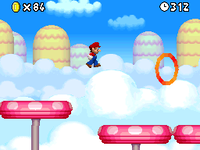 A Red Ring in World 1-5 of New Super Mario Bros.

In New Super Mario Bros. Wii, Red Rings serve the same function as before. However, an item will appear for every character that is onscreen and not in a bubble when the final coin is collected. Fire Flowers, Propeller Mushrooms, Ice Flowers, or Penguin Suits, depending on the level, will appear for every character who is in their Super form. Anyone who is in their Fire, Ice, Propeller, or Penguin form will gain a 1-Up Mushroom.

Red Rings also appear in Super Mario 3D Land, making their first appearance in a 3D Mario game. They now make only five Red Coins appear instead of eight, but other than that, they function the same way. Depending on the level, they can yield a Fire Flower, Super Leaf, Statue Leaf, or Boomerang Flower when Mario or Luigi is in his Super form. Like always, when all Red Coins are collected in a powered-up form, a 1-Up Mushroom appears.

Red Rings reappear in New Super Mario Bros. 2, where they serve nearly the same function as in the previous New Super Mario Bros. games. The resulting Red Coins that appear from passing through the Red Rings can either remain in the air as usual or slowly descend from the sky with parachutes. If a player collects all of the Red Coins in a Cannon or Rainbow level, they are rewarded with a Gold Flower in their inventory. Either a Fire Flower or a Super Leaf will appear if Super Mario collects the eighth Red Coin. The 1-Up Mushroom is replaced by a Gold Mushroom in Coin Rush mode.

Red Rings reappear in New Super Mario Bros. U, where they retain the same functions as in previous games. There is also a new Green Ring, which has similar functions, except it generates Green Coins.

In New Super Mario Bros. U Deluxe, collecting all eight Red Coins as Toadette in most forms will yield a Super Crown.

Red Rings also appear in Super Mario 3D World and Super Mario 3D World + Bowser's Fury. This time, like in the New Super Mario Bros. games, eight Red Coins are produced instead of five, and they give Super Bells, Fire Flowers, Super Leaves, or Boomerang Flowers (depending on the level), even if another higher-tier power-up is active.

Red Rings reappear in Super Mario Run. When Mario goes through a Red Ring, only five Red Coins appear, like in Super Mario 3D Land. In addition, collecting all of them always grants a Super Star.

A Red Ring makes its first appearance outside the Super Mario series in Super Smash Bros. for Nintendo 3DS and Super Smash Bros. Ultimate, in the Golden Plains stage. Like in the New Super Mario Bros. games, passing through one spawns eight Red Coins; however, each one is worth five coins when collected.

In Mario + Rabbids Kingdom Battle, Red Rings are encountered in the overworld, and they produce eight Red Coins. Collecting the last Red Coin unveils a treasure chest containing a new weapon. There are three for each world and an additional four around Peach's Castle, making for a total of sixteen Red Rings.

In Mario + Rabbids Sparks of Hope, Red Rings return, serving the same purpose as they did in Mario + Rabbids Kingdom Battle, although the reward is a Planet Coin and a treasure chest containing coins rather than a new weapon. There is one on all five planets.