Not to be confused with Vs. Lakitu Launch. 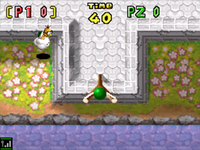 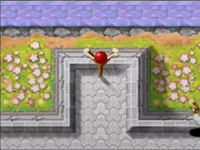 Lakitu Launch is a 1-on-1 minigame featured in New Super Mario Bros. While it shares the same name as the single-player version, this version is a completely different minigame and can be played only by two players.

To play, both players use the stylus on the Nintendo DS's Touch Screen and must launch colored balls at Lakitus that fly across the screens. The players get 100 points for each shot, followed by 200, 400, 800, 1,600, and 3,200 points if they land multiple shots consecutively. Some Lakitus carry a Star, which is worth 1,000 points. However, the points go to whoever's screen the Star is on, so each player should be careful to hit it only if it is on their screen. Different-colored balls that collide bounce off each other. Whoever has more points after 40 seconds wins.

Take aim at Lakitu with your trusty slingshot, and open fire! You score points if Lakitu drops a Star in your area. Be careful not to let Stars land in your opponent's territory, though!