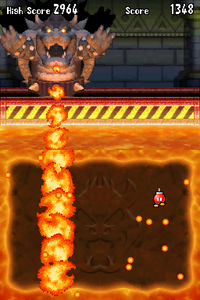 The Mechanical Bowser seen in the minigame

The music for this minigame is a cover of the castle level music from Super Mario Bros.

In the multiplayer version, each player has three lives. Like in single-player mode, if Bob-ombs touch any hazards, they explode and lose a life. When all the other Bob-ombs lose all three lives, the last Bob-omb standing is the winner. The game also has adjustable difficulty. The harder it is, the more fireballs and the more frequent Bowser breaths there are.