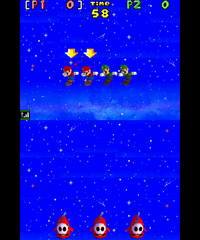 Jumping Brothers is a 1-on-1 minigame from New Super Mario Bros. As such, it is playable only in the Vs. Battle mode, and only two players can play.

The game has a similar playstyle to Bounce and Trounce. Player 1 controls two Marios, while Player 2 controls two Luigis. The players must keep their respective brothers in the air to earn as many points as possible in the 60-second time limit. Players earn points by landing on either a Fly Guy or one of the opposing player's characters. Landing on a Fly Guy earns one point, while landing on an opponent earns two; the latter also causes the opponent to lose two points. Hitting a Fly Guy causes that character to be temporarily stunned. Players also lose five points by falling into the pit below, which can be prevented by tapping the player's respective character on the Touch Screen with the stylus. Victory goes to the player with more points at the end of the game.

P1 is Mario, and P2 is Luigi. Touch your bro to make him jump. You get a point for landing on a Shy Guy and two for landing on your bro, but you lose five for falling off the screen and two if your bro lands on you!