It has been requested that this article be rewritten and expanded to include more information. Reason: include Wario World information

A Chain-Link, also known as a fence, Chain Link Fence,[1] or wire net,[2] is an object found in various Mario games. The player character can climb along the surface of the fence and punch it to defeat enemies on the other side. In some games, there are panels that can be used to flip the character to the other side. Similar climbable meshes of vines and other interlocking materials appear in Wario Land 3.

In Super Mario World, fences occasionally appear in castles. Mario or Luigi can jump on, climb on, and jump off fences to go around traps such as lava. The brothers can also flip to the other side by punching a square panel. Climbing Koopas are commonly found to be climbing on fences, and they are capable of climbing around both sides of a fence. The brothers may punch the climbing Koopas that are on the other side to defeat them.

Mario climbing a wire net in the Hazy Maze Cave

In Super Mario 64 and Super Mario 64 DS, wire nets have different designs depending on the location and have multiple purposes depending on the contexts. Some of them, found primarily in the Hazy Maze Cave, in Bowser in the Fire Sea, and on Tiny-Huge Island, can be climbed, but only horizontally instead of vertically. Others are instead used as walls that only Vanish Mario can get through, which is used more commonly. Sometimes, this is needed to collect a Power Star, while other times (particularly in the remake), it is simply a shortcut (such as in Express Elevator--Hurry Up!). Certain brick walls in Wet-Dry World's downtown work the same way. Sometimes, vertical or block-shaped ones are not found near a Vanish Cap (or Power Flower in the remake) and, as such, are simply used as walls or platforms. This type appears heavily in the Hazy Maze Cave; Dire, Dire Docks; and Tick Tock Clock. 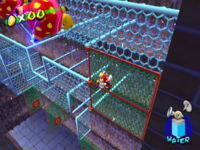 In Super Mario Sunshine, fences can be climbed in both horizontal and vertical orientations. Many of the fences take the form of boxes which enclose enemies and coins, although some are traditionally flat. Fences appear in Ricco Harbor, Pinna Park, and Pianta Village and can be used to knock off enemies from the other side. The game also introduces Moving Fences. 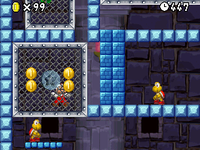 , being the principal feature of both levels.

Fences reappear in New Super Mario Bros. Wii as obstacles in Towers and Castles, similar to Super Mario World. Certain areas are inaccessible unless the player switch to the other side of the fence, via the revolving gate. There is also a special type of fence which can be rotated 90 degrees left or right by the first player who climbs the fence by tilting the Wii Remote left or right. Also, a yellow fence is used in the Power-up Panels minigame.

Fences also reappear in New Super Mario Bros. 2, along with other special types of fences introduced in the game. In World 5-

, there are large fences made up of smaller fences that move upwards along with the rising lava and, at certain points, rotate. They are required to progress through most of the level. In World 5-Castle, Moving Fences move along a track, and can be changed to move above or below the wire by pressing

. The revolving gates are absent.

Fences appear once again in the Wii U game New Super Mario Bros. U with the same design as in Super Mario World, with red borders instead of gray. Unlike in other games, however, the player cannot punch on the fences. The revolving gates are absent once more.

Chain-Links (parsed Chain Links in the Prima guide[3] and Chainlinks in the PAL release) appear in Super Mario 3D World and Super Mario 3D World + Bowser's Fury in several stages as either stationary walls or platforms or moving along tracks as obstacles. In this game, they cannot be climbed on unless the character assumes the Cat form, but can otherwise simply be used to wall jump.

A small fence makes a brief appearance as an obstacle in Neon Castle in the Super Mario World episode "Mama Luigi". Mario, Luigi and Yoshi are able to easily pass this gate by simply using its revolving door.

In Mario Party 9, a fence appears in the Bowser Jr. minigame Cage Match. Fences are used in the same way as in New Super Mario Bros. Wii.

In Mario Party: Island Tour, fences appear as floor during one segment of Gyro for the Gold.