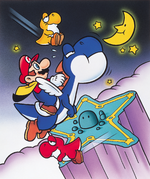 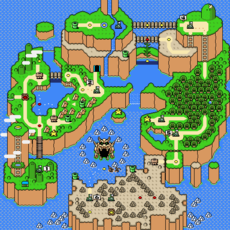 Star World is the secret eighth world of Super Mario World. It can be reached by finding one of the five hidden Star Roads.

The levels have different-colored Yoshis in them, and there is a Baby Yoshi in the beginning of a few of the levels so the player can exit the stage with a new ride.

By finding the secret exit in Star World 5, another Star Road leading to the Special Zone can be accessed.

According to the Japanese Shogakukan guide for the game Yoshi, Star World played an instrumental role in the history of Yoshi's Island. Five shooting stars (implied to be the Star Road) came from the light of Star World one night, and one of them knocked the top half of a fossilized egg to its lower half inhabited by contemporary monsters, resulting in Yoshi hatching. These events also resulted in the resurrection of other dinosaurs, and the islands came to be known as Dinosaur Land.[1] 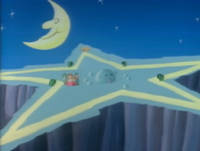 Star World appears in at least two episodes of the Super Mario World animated series, although here it is referred to as the Star Path. Unlike in the game, the middle hill has a visible door, similar to the domes in Dome City, and the course itself visibly has pipes and lacks the red course marks.

What appears to be Star World also appears in "Party Line," when the caterpillars are lost in space. It appears as a background object, and it is shown to be very tall.