Dinosaur Land, also known as Dinosaur Island,[1] is an archipelago inhabited by dinosaurs and the region where Mario, Luigi, and Princess Toadstool go on a vacation to in Super Mario World. Dinosaur Land generally has a lush, green appearance to it, along with several hills. It also has some mountains, caves, a forest area, and an underground valley. There is almost no industrialization on Dinosaur Land except for Ghost Houses, and the fortresses and castles set up by Bowser and the Koopalings.

Yoshis are notable inhabitants of Dinosaur Land and live in the first world, Yoshi's Island. Despite its name, several of Dinosaur Land's inhabitants are not dinosaurs, such as Dolphins and Swoopers. Other dinosaurs found on the island include Blarggs, Dino-Rhinos, Dino-Torchs, Eeries, Rexes, and Reznors.

The Japanese Shogakukan guide for the game Yoshi features an origin story for Dinosaur Land. In the ancient past, an active volcano in the middle of the islands located in the southern seas rendered the dinosaurs living there extinct. Tens of thousands of years later, five shooting stars (implied to be the Star Road) came from the light of Star World one night, and one of them knocked the top half of a fossilized egg to its lower half inhabited by contemporary monsters, resulting in Yoshi hatching. These events also resulted in the resurrection of other dinosaurs, and the islands came to be known as Dinosaur Land.[2] 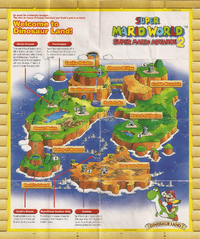 A labeled map of Dinosaur Land, as seen on a folded flyer included with Super Mario World: Super Mario Advance 2.

These are the prominent locations of Dinosaur Land: 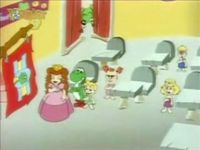 Princess Toadstool and her class pledge to Dinosaur Land's flag, as seen in the Super Mario World episode "A Little Learning".

“I pledge allegiance to the flag of the United Lands of Dinosaur World, and to the repulsiveness for which he stands: one Koopa underground, reprehensible, with lizards and Goombas for all.”
—Princess Toadstool, Yoshi, Oogtar, and the Cave Kids (first sentence), Hip and Hop Koopa (second sentence)

Dinosaur Land is the main setting in every episode of the Super Mario World animated series. Throughout the show, Dinosaur Land is mostly referred to as Dinosaur World (except by King Koopa in "Send in the Clown").

Unlike the game Super Mario World, Dinosaur World's main inhabitants consist of Cave People, and there is only one Yoshi that lives there. The Cave People lack technology, although they managed to have built at least one city, Dome City. Throughout the show, Mario, Luigi, and Princess Toadstool have tried to introduce modern culture to Dinosaur Land's inhabitants.

In "A Little Learning" Princess Toadstool opens a school. The episode reveals that Dinosaur World has a flag, which is red with blue and yellow stripes. A light blue circle with a green dinosaur is in the center of the flag. The school day starts with the characters pledging to the Dinosaur Land flag; the pledge largely parodies the United States' Pledge of Allegiance. Princess Toadstool, Yoshi, and the Cave People say the first part of the pledge. Hip and Hop Koopa interrupt them by making up the second part of the pledge, which is about King Koopa and his minions.

Dinosaur Land is featured in the Super Mario Adventures comic. It introduces Yoshi Village, which has Yoshi as its "Chairman of the Dinosaur Chamber of Commerce".