"Rock TV" is the tenth episode of the Super Mario World animated series. This episode can be seen as a commentary on television addiction, an issue that had gained widespread focus by the time it aired. In 1990, the year before this episode aired, the United States Federal Communications Commission enacted the Children's Television Act which required networks to strengthen educational values in children's television. After Super Mario World aired its lone season, NBC followed suit in 1992 by discontinuing its Saturday morning cartoon lineup in favor of expanding the morning news program Today to Saturdays.

While pacing back and forth in his castle, King Koopa muses about how he has not done anything exceptionally evil in a while. Trying to think up a plan of some kind, Koopa remembers one of his trips to the Real World; more specifically, how television can put people in a near vegetative state. Suddenly, Koopa comes up with the idea of using TV to rot the minds of the cave-people in Dome City.

As the cave-people stare in awe at the giant television set, King Koopa appears behind it with Cheatsy and Kooky von Koopa, who are helping him put on a rather crude human costume. Going into the giant television's empty screen, Koopa, in costume, introduces himself as "Robby Rockwell". "Robby" proceeds to tell all the onlookers that he is here to introduce "Rock TV". Oogtar proceeds to ask what Rock TV is, and Koopa explains that it has hundreds of different shows such as "Mr. Koopa's Neighborhood" (which Yoshi finds fun) and "The World Dinosaur Wrestling Federation" (which is really nothing more than dinosaur puppets bumping into one another). After being booed for this poor performance, Koopa shows the cave-people "Rock, Rock TV" with such stars as "Vanilla Ice-Age"; after saying this, Koopa proceeds to dress-up and dance around. Leaving the stage, Koopa returns in his Robby disguise and proceeds to tell everyone that they can buy their own "Koopasonic Rock TV" for ten coins and a coin a minute. 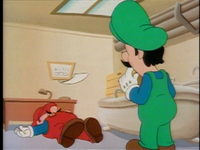 Mario's reaction after getting the phone bill.

Later, Mario and Luigi are in line to buy a Rock TV. Despite Mario saying that ten coins is a great deal, Luigi says that one coin a minute can really add-up and reminds Mario of the "Speak to Santa Hotline" incident in Brooklyn, which added up to a $1,295.31 phone bill. Hearing this, Mario simply tells Luigi that paying for their TV will be easy, as all they need to do is bash blocks to get them. Approaching Koopa, Mario proceeds to buy a TV, despite Luigi's suspicion of "Robby Rockwell". 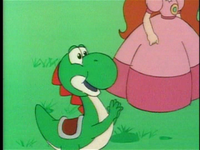 After a while, Koopa says he has "a game he wants everybody to play", at which point Mario and Luigi's TV breaks down, snapping them out of the trance. On the rest of the televisions, Koopa orders all the cave-people to go to Dome Castle and capture Mario and Luigi. Like robots, the cave-people obey Koopa and, grabbing anything nearby to use as weapons, rush off to Dome Castle. At Dome Castle, Mario, frustrated with his broken TV, throws it out a nearby window and into the moat surrounding the castle. As Mario does this, he notices a mob of cave-people storming the castle with clubs. Before Mario or Luigi can do anything, they are captured by the zombified cave-people.

Brought to King Koopa's giant TV, Mario and Luigi are forced to participate in "All-Star Prehistoric Tag-Team Wrestling", which has Hip and Hop Koopa as the judges and Big Mouth Koopa as the announcer. After going on an extremely long-winded speech, and introducing the Tyrannosaurus Twins, Big Mouth is finally shut up by Koopa, only to return, and then as he is introducing the Marios, one of the twins tosses him out. Koopa proceeds to introduce Mario and Luigi into the ring.

Attempting to be friends with the Tyrannosaurus Twins, Mario ends up being swirled around by the bigger of the two, while Luigi gets tangled up in the ropes and sling-shot into the opposite side of the ring by the smaller one. With the Mario Bros. taking a beating, Princess Toadstool and Yoshi appear and, after seeing that Mario and Luigi are in trouble, with Yoshi's help, hitting a ! Block at the top of the giant TV, they release a swarm of miniature Marios. With Big Mouth, Hip, Kooky, and Bully Koopa chasing the miniature Marios and the Tyrannosaurus Twins distracted, Princess Toadstool manages to hit a ? Block, which releases a feather.

Attempting to grab this feather, Koopa is knocked aside by Mario, who uses the feather to transform into Cape Mario. With his newfound powers, Mario easily defeats the Tyrannosaurus Twins. In the next scene, Yoshi begins eating all the nearby Rock TVs, spitting the apparently disgusting-tasting Koopa Wizards out of them.

As Mario and Luigi thank Princess Toadstool for helping them, Yoshi begins eating the nearby, giant TV. A panicking King Koopa tries to stop Yoshi because he thinks that the giant TV is still useful to him somehow, only to be crushed by dozens of falling blocks. A cheerful Yoshi, wanting to help the trapped Koopa, begins to eat all the blocks around him at an extremely slow pace. 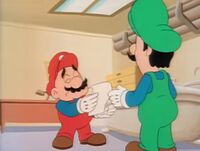