"Gopher Bash" is the ninth episode of the Super Mario World animated series. 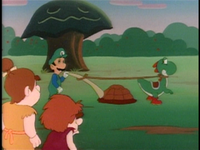 Luigi and Yoshi about to plow the field.

First, Luigi, with the help of Yoshi, tries to teach the Cave People how to plow. Unfortunately Yoshi, upon seeing a berry, runs a bit too fast and Luigi is dragged along by the hungry dinosaur. Once Yoshi eats the berry and the field is plowed (looking like Yoshi's face), it is revealed that King Koopa and Cheatsy Koopa have been spying on everyone.

Upon seeing that Luigi's efforts to teach the Cave People crop-growing is working, Koopa begins to worry; if the Cave People can grow their own food, they will be harder to subjugate. Seeing his father worrying, Cheatsy comes up with an idea: steal all the food the Cave People grow. Without any food, the Cave People will starve and be forced to come to him for food. Thinking this idea to be great, Koopa leaves Cheatsy in charge of things.

After the field is completely plowed, Luigi begins to plant seeds and tells the Cave People to do so too. Unfortunately, the Cave People do not understand too well and begin to plant any nearby objects, much to Luigi's dismay. After a while, the seeds are successfully planted, with the next step being to water the plants. 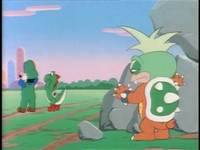 Cheatsy spying on Luigi and Yoshi.

Unfortunately, the Cave People take things out of hand and tip over a nearby well, which spills a wave of water over the field, washing Luigi and Yoshi away, much to Cheatsy's amusement. After the water washes away, Mario pulls his trapped brother out of the mud and asks how the farming is going. Luigi replies that it is going great and clomps away through the mud as Yoshi pulls himself from the dirt.

Surprisingly, the Cave People succeed in growing rows of crops, much to Luigi's delight. Later that night, Cheatsy and several Gophers sneak into the tunnels beneath the field and begin taking all the crops. While Cheatsy and the Gophers giggle at their deed, several other Gophers appear with a sack filled with Piranha Plants. The Gophers proceed to stick the Piranha Plants in the holes the crops used to be in.

Waking-up the next morning, Mario, Luigi, and Yoshi find all the crops gone. Reaching into a hole to see if anything is left, Mario is surprised as a Piranha Plant almost bites his arm. Yoshi manages to slurp-up the Piranha Plant before it can do any damage though. However, just as Yoshi eats the one Piranha Plant, several more appear out of the ground. 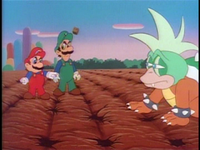 Cheatsy caught in the act.

Trying to get their comrade down, Cheatsy and the other Gophers are pulled to the surface when Yoshi pulls on the Piranha Plant's stock hard enough to tear it up, with Cheatsy and the Gophers still hanging on to it. Flung right in front of Mario, Cheatsy taunts the two, saying they will never see their crops again. Before either Mario or Luigi can grab him, Cheatsy leaps down a hole dug by his Gopher henchmen, with Mario, Luigi, and Yoshi falling in afterwards.

Getting up, Luigi and Mario begin to wonder where Cheatsy has gone. Yoshi proceeds to point to a nearby Warp Tube, saying Cheatsy went that way. Preparing to jump into the Warp Tube, Luigi is stopped by Mario, who says that the Cave People do not need the food Cheatsy stole, as they can just go back to picking berries. A saddened Luigi says that he told the Cave People they did not need to pick berries anymore, since they had the crops. The Cave People listened to Luigi and did not store any food for the winter, meaning they will starve if they do not get the crops back.

Cheering Luigi up, Mario and Yoshi say they will help him get the food back. Going through the Warp Tube, Luigi, Mario, and Yoshi are sent plummeting down a pit. Luckily, Mario manages to grab a nearby magic balloon. Becoming inflated, Mario grabs Luigi and Yoshi and descends to the ground safely. 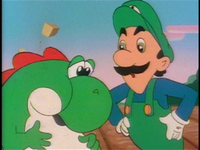 Yoshi, having eaten the entire sack of crops.

As Cheatsy sings, Mario, Luigi, and Yoshi grab the Gophers one by one. When there are none left, they reveal themselves and revamp the ending of the song. A surprised Cheatsy has no time to get out of the way as Luigi lets go of a rope, which drops Cheatsy's tied-up Gopher minions on top of him. Grabbing the sack filled with food, Mario, Luigi, and Yoshi take it over to a nearby Warp Tube and stuff it down before jumping in themselves. Failing to drag himself out from under his bound minions, Cheatsy can only say, "I hate those plumbers..."

Getting back to Dome City, Luigi announces to the Cave People that he got all their food back. Opening the sack of food, Luigi is horrified to find a bloated Yoshi roll out of the bag, having eaten all the vegetables. Luigi, disappointed that all that work to get the food back was for nothing, tells Yoshi to start planting more food. Yoshi agrees but upon trying to work in his overfed state, belches unexpectedly, allowing Mario, Luigi, and Princess Toadstool to share a good-natured laugh.