The Night Before Cave Christmas

"The Night Before Cave Christmas" is the fifth episode of the Super Mario World animated series.

While at a barbecue, Mario, Luigi, and Princess Toadstool can only watch in dismay while Yoshi and Oogtar fight over a "barbecue mammoth rib". Mario attempts to stop the fighting, only to get some barbecue sauce spattered on his face when Yoshi and Oogtar accidentally tear the rib in half.

After wiping the sauce from his face, Mario claims that all Oogtar ever does is squabble with others; after saying this, Mario notices that it isn't just Oogtar, all the cave-people have been acting grumpy recently. Watching the cave-people fight makes Mario think of how everyone acts nice to one another around the holidays. After dodging some corn thrown by Oogtar, Luigi replies that Mario means Christmas, which is too odd because it is the middle of August and no where near Christmas. 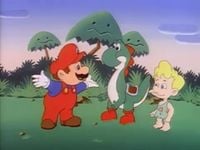 Mario, about to explain Christmas to Oogtar and Yoshi.

Despite this detail, Mario decides to celebrate Christmas with the cavepeople, thinking it will cheer them up (saying that since they are in Dinosaur World, they can have Christmas any time they want, even though the cave people do not know that Christmas doesn't come in the summer). Soon after stating this, a confused Yoshi asks what Christmas is. Mario proceeds to explain what Christmas is to Yoshi and Oogtar, with Oogtar taking particular interest in Santa Claus and the presents he delivers.

After his explanation about what Christmas is, Mario begins to decorate all of Dome City with the curious and excited cave-people watching him. After hearing about Mario's plans for a "Cave Christmas", King Koopa pops out of his hiding place in a garbage can and begins to wonder why Mario would be celebrating Christmas in the hottest month of the year.

With "Cave Christmas Day" coming up, Mario, Luigi, Yoshi, Princess Toadstool, Oogtar, and Ooga begin to cut down several Christmas trees, while King Koopa and Bully Koopa spy on them.

After cutting down the Christmas trees, Princess Toadstool and Yoshi begin to decorate them with candy canes, while King Koopa and Bully look on. After saying he has a plan forming, King Koopa and Bully are accidentally picked up by a garbage-collecting dinosaur and thrown out with the rest of the trash. 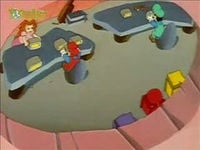 With Christmas coming, Mario, Luigi, and Princess Toadstool begin to make presents for the cave-people's children, while Oogtar looks on with greedy eyes. After yelling "Oogtar want" aloud, Oogtar is found by Luigi, who throws him out of the toy workshop before he can grab anything. As Princess Toadstool begins to pack the toys for delivery, King Koopa looks on, with the plan of stealing all the toys for "Koopa Christmas Morning".

As Luigi and Mario begin packing up for the big toy delivery, Oogtar sneaks into the workshop, wanting to take all the best toys for himself. As Oogtar is rummaging through Mario's toy sack, he is surprised when King Koopa approaches. Hiding in the toy sack, Oogtar is taken away by King Koopa, who steals the sack of toys meant for the cave-children.

While trying on a Santa Claus outfit, Mario notices that all the toys have been stolen. Rushing into the workshop, an angered Mario realizes it had to have been King Koopa who stole the toys. A fuming Mario vows to reclaim the toys and sets off for Neon Castle.

Mario, with the help of Yoshi, who has a pair of Magic Wings on, sets off to Neon Castle. With Mario fast approaching, King Koopa begins praising himself on having committed such a bad deed. While inspecting the toys he stole, King Koopa discovers Oogtar in the bag. Demanding to know what Oogtar is doing there, a fight breaks out between King Koopa and Oogtar over who gets the presents. Tearing open a present meant for Bully, Oogtar discovers that the present is a Bob-omb, which explodes. King Koopa gets very angry, but Oogtar tries to run away from the enraged Koopa king, only to be captured. 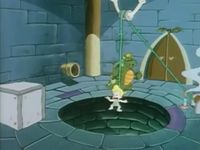 King Koopa, about to abandon Oogtar.

Deciding to get rid of Oogtar, King Koopa begins to lower a tied-up Oogtar into a pit with a hungry orange Tyrannosaurus rex in it. In true villain fashion, King Koopa leaves Oogtar alone, with a candle to burn through the rope suspending him above the Tyrannosaurus' pit. Koopa says to Oogtar to have a merry Cave Christmas. He then concludes that the name "Oogtar" said backwards is "Ratgoo", and leaves Oogtar alone.

Landing in front of Neon Castle, Mario and Yoshi hear Oogtar's cries for help, but they break through the wrong window, and are besieged by Mechkoopas, Thwomps, Dry Bones, and Koopa Football Players. While running from all these enemies, Mario finds a feather and uses it to become Cape Mario. With his power of flight, Mario picks up Yoshi and flies through a nearby Warp Tube.

Exiting this Warp Pipe, Mario and Yoshi arrive in the room Oogtar is being held captive in. Right before Oogtar is fed to a T-Rex, Mario flies in and saves him. Bringing Oogtar to safety, Mario, who Oogtar believes to be Santa Claus, manages to get him to confess to trying to steal all the presents.

Loading all the presents in his sleigh, Mario, Oogtar, and Yoshi escape King Koopa's Castle, just as the Koopa family (some creatures and Bully Koopa) find all the presents King Koopa stole missing. Arriving at Dome City, Mario drops Oogtar, who has had an epiphany, off at his dome-house. As Oogtar falls asleep, Mario drops off what appears to be a miniature television on his bedside table. Mario then leaves to deliver presents to the rest of Dome City.

Later in the morning, while Mario is asleep in the Dome Castle, Oogtar sneaks in and, believing Santa had forgotten to give a present to Mario, drops-off a present for him. 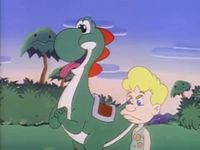