"Party Line" is the eighth episode of the Super Mario World animated series.

While out for a walk, Mario, Luigi, and Yoshi begin discussing how dangerous it can be to live in Dinosaur World. As Mario says this, a dinosaur leaps in the group's path and shoots a fireball at them. Dodging the fireball as the dinosaur leaps away, Mario goes on to say that the citizens of Dome City have been having a lot of accidents lately. As if on cue, Yoshi trips on a used-up block and falls.

Princess Toadstool suddenly appears to bandage Yoshi's wound. After having several large band-aids put on Yoshi's tail, the group is attacked by the evil dinosaur. Running from it, Yoshi ends up running straight into a tree, and Mario begins to wish everyone could just have an emergency number to call on the telephone when they got in trouble. Asking what a phone is, Yoshi is subsequently bonked on the head by a falling coconut before Mario can finish explaining. Mario then gets an idea: using the two halves of a coconut and a vine, Mario creates a crude phone to use as communication equipment. Testing his invention out with Luigi, Mario is overjoyed when he realizes it works. 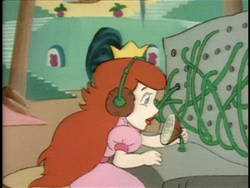 Princess Toadstool in the Phone Central.

Much later, Mario and Luigi have put together an expansive phone system across the city, with Princess Toadstool as the operator. Unfortunately, the phone-business gets out-of-hand: the Cave People are talking non-stop on their phones, the vine telephone-wires are growing all over the place, and the Princess is being completely overworked. To make matters worse, the Cave People have begun to neglect their duties, such as watering their crops.

Before Mario and Luigi can discuss matters further, they are suddenly attacked by a swarm of Caterpillars. While Mario is being chased by caterpillars, Luigi tries to call for help, only to get a busy-signal. Panickingly, Mario and Luigi climb up a nearby tree; this proves futile, though, as the caterpillars simply climb after them, eating vines along the way. 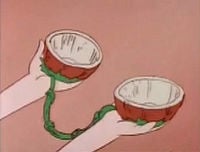 Mario, trying to find something to fight the caterpillars off with, sees several ? Blocks floating in the air. Unable to reach a block, Mario is bitten on the leg by a caterpillar. This bite sends Mario leaping through the air, hitting a block and subsequently crashing down onto the ground, where he is surrounded by caterpillars. Grabbing the Starman that fell from the block, Luigi becomes invincible, grabbing all the caterpillars and throwing them into the tree. Luigi then grabs a vine hanging off the side of the tree and pulls it, which pulls the tree down, before letting go, literally flinging the caterpillars into space.

After defeating the caterpillars, Mario and Luigi are approached by Oogtar, who says his phone is out of order and demands the Mario Bros. fix it. Before Mario or Luigi can say anything, they receive a call for help from Princess Toadstool, who has become trapped in a mess of vines. After freeing her, Mario, Luigi, and the Princess see a horrific sight - the evil dinosaur from before is back and hungrier, and the Cave People, being too busy on their phones, are completely defenseless against him.

Telling Luigi and Princess Toadstool to warn the Cave People, Mario tries to distract the evil dinosaur. Lunging at Mario, the evil dinosaur falls when Mario simply jumps out of the way. Getting-up, the evil dinosaur sees Mario hitting several ? Blocks, looking for an item to help him in battle. Getting nothing but coins, Mario makes a feeble attempt at defending himself by throwing them at the evil dinosaur, who simply eats them and spits them out, disgusted, and disorients Mario by throwing one at his head.

The coin then hits a nearby block, which releases a Cape Feather. Mario tries to grab the feather and stumbles to the ground instead, stars circling his head. Luckily, Mario somehow manages to obtain a Starman from those stars; with the power of the Starman on his side, Mario grabs the evil dinosaur by his snout and hurls him into space, where he crashes into the same swarm of caterpillars that Luigi launched up there earlier. Mario then states "Call me Mario da Vinci! I've just invented the dino-copter!".

Rushing into a nearby house, Luigi and Princess Toadstool find a sleeping Oogtar, with a phone still to his ear. Taking the phone, Luigi and the Princess proceed to do the same with all the Cave People. All that is left to do is take down all the vines in Dome City, which Yoshi enjoys very much, as he gets to eat them all.

The Dinosaur jumping from in front of the building.