The ghost shipwreck in New Super Mario Bros. U

The Ghost House of Chocolate Island

Ghost Houses first appeared in Super Mario World, where there were six Ghost Houses in Dinosaur Land: two in Donut Plains (one secret), one inside the Vanilla Dome, one in the Forest of Illusion, one on Chocolate Island, and one in the Valley of Bowser. As with castles, Yoshi will stay outside the Ghost House when Mario or Luigi enters. The given reason is Yoshi's fear of ghosts, but the technical reason is because the doors inside Ghost Houses (and castles) cannot be entered while riding Yoshi, and some enemies located inside do not work properly with Yoshi.

Whenever Mario completes one, the game can be saved, regardless of whether the stage has already been beaten. As Mario can replay the Ghost House stages at any time, this is an easy way to save the game whenever the user wishes.

Mario in a Ghost House in New Super Mario Bros.

Several Ghost Houses appear in New Super Mario Bros.; these introduced more new ghost species such as Phantom Hands, Broozers, and Balloon Boos. The game also introduces the Ghost House quirk of having Boos cover up the bottom screen while Mario or Luigi is inside Ghost Houses. There are four in the game, located in World 3, World 4, World 5 and World 7. All Ghost Houses in the game have secret exits, but no checkpoints.

The Ghost Houses from the previous game re-appear in New Super Mario Bros. Wii, this time with Boos flying around them on the world map, just like in Super Mario World. They are located only in World 3, World 4, World 5, World 7 and the Coin Battle World. Some Ghost Houses introduce new enemies like Scaredy Rats and Ghost Vases and most of them have many fake walls. As in the previous game, all Ghost Houses have secret exits, but no checkpoints.

A Ghost House in World 4 in Super Mario 3D Land.

In Super Mario 3D Land, Ghost Houses return; however, only one of them is puzzle-focused, with the others being like other courses. They are found in World 4, World 6, World 8, Special 4, Special 5 and Special 6 of the game. Most of them (bar World 6-3 and Special 4-2) also have checkpoints. There are new enemies, including Tail Boos and Peepas.

A Ghost House in World 2 in New Super Mario Bros. 2.

A Ghost House in New Super Mario Bros. U.

There are four Ghost Houses in New Super Mario Bros. U and its Nintendo Switch port: Haunted Shipwreck in Sparkling Waters (similar to the Sunken Ghost Ship from Super Mario World), Swaying Ghost House in Frosted Glacier, Which-Way Labyrinth in Soda Jungle, and Spinning Spirit House in Meringue Clouds. Soda Jungle's haunted section features haunted courses like Painted Swampland and Deepsea Ruins. There is also a Ghost House-related Challenge Mode course, The Haunted Propeller. Once again, in all the Ghost Houses, there are secret exits and no checkpoints.

As it is with the rest of New Super Luigi U, different Ghost Houses appear in the same locations as in New Super Mario Bros. U: Haunted Cargo Hold in Sparkling Waters, Peek-a-Boo Ghost House in Frosted Glacier, Boo's Favorite Haunt in Soda Jungle, and Vanishing Ghost House in Meringue Clouds. Once again, Soda Jungle features haunted levels such as Deepsea Stone-Eyes.

Mario inside a Ghost House in Super Mario 3D World

In Super Mario Maker 2, setting the Ghost House theme to night causes everything except for a short radius around the playable character to become dark. 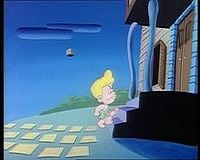 Oogtar about to go inside the haunted house

A Ghost House owned by Wizenheimer, referred to as a haunted house, is seen in the episode "Ghosts 'R' Us" of the Super Mario World animated series.

The haunted house is inhabited by Boos and a Big Boo. As Mario and company are searching for Oogtar in the Enchanted Forest, they meet Wizenheimer, who then locks up Mario, Luigi and Princess Toadstool into the dungeon of his haunted house. Yoshi and Oogtar end up entering the house and are constantly chased by Boos until they eventually find the dungeon where their friends are being kept. 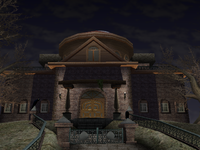 In Mario Party 4, Boo Houses appear as a type of shop. There is one Boo House on each board, typically in a fairly difficult-to-access location. They are managed by the board's host in tandem with a single Boo (in Boo's Haunted Bash, the Boo House is managed by two Boos), and enable a player who visits to use the Boo's Crystal Ball, allowing the player to pay 5 Coins to steal Coins from another player, or 50 Coins to steal a Star from another player. The Boo House acts as a replacement for Boo's function as a solitary character in the previous Mario Party games, who would steal Coins and Stars at the same rates.

Luigi's Mansion, the main location of the game of the same name, is a Ghost House. In addition, its sequel Luigi's Mansion: Dark Moon is set across multiple mansions.

There is a "Haunted House" attraction in The Fun Fair, the hub area of Mario Pinball Land; however, it has actual Boos and a Big Boo boss can be encountered. 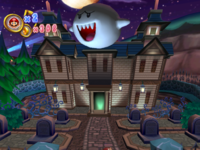 In Dance Dance Revolution: Mario Mix, a Ghost House is found in Wario's Carnival. Though this so-called "Ghost House" is a haunted house attraction, it actually contains Boos.