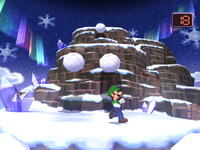 Avalanche! is a minigame in World 4 of Dance Dance Revolution: Mario Mix. The minigame begins with an introduction in which two rolling snowballs roll off a cliff. The player has to tap left and right on the Dance Pad to have Mario or Luigi avoid the giant rolling snowballs. If Mario or Luigi get hit, they will fall to the bottom of the valley and lose 100 coins. However, if they succeeded, they would be awarded 100 coins. Avalanche! can be played in the minigame mode once it is unlocked.

Avoid the snowballs by moving left and right! Look out! If you get hit, you'll fall to the bottom of the valley!