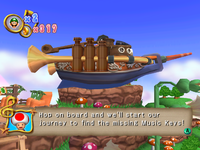 The SS Brass is an airship with a musical instrument theme. In Dance Dance Revolution: Mario Mix, Mario (and/or Luigi) and Toad) use it as their form of transportation to fly across the Mushroom Kingdom to collect the Music Keys. The main form of propulsion, powered by giant trumpet-like turbines, gets revamped into trombone-like, or French horn-like turbines depending on the level, after the player defeats the Pirate Lakitu in "Fishing Frenzy". As evidenced in the songs "In The Whirlpool" and "Step by Step", it has the capabilities to be driven underwater like a submarine.

The SS Brass is frequently shown throughout the story mode's cutscenes to show the main characters travel between locations. The songs "In The Whirlpool", "Step by Step" and "Always Smiling" are all set on the SS Brass, showing Mario and/or Luigi controlling the ship's wheel. An unlockable minigame titled Fire Up the SS Brass involves maneuvering the ship through tunnels.