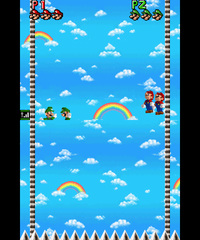 Jumping Sudden Death is a 1-on-1 minigame in New Super Mario Bros. It is playable only in the Vs. Battle mode.

The objective of this minigame involves the players attempting to avoid the spikes at the bottom of the screen for as long as possible by jumping. Player 1 controls two Marios, and Player 2 controls two Luigis. The player can jump by tapping their character with the stylus once one of them reaches the Touch Screen. Each player has three lives, and the player that loses them all first loses.

Keep bouncing higher to avoid those spikes coming up at the bottom of the screen! P1 is Mario, and P2 is Luigi. Tap your bros to make them jump. Whoever survives longer is the winner.