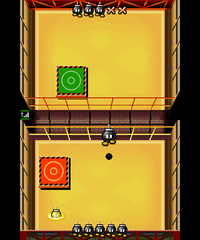 Bob-omb Trampoline is a 1-on-1 minigame featured in New Super Mario Bros. Only two players can play this minigame.

The game involves the two players trying to keep Bob-ombs from falling into the lava on their screens by having the Bob-ombs land on the trampolines instead. The players control the location of the trampoline by dragging it across the bottom screen with the stylus. Any Bob-omb landing on a trampoline is sent over to the opposing player's screen. As the game progresses, more Bob-ombs appear onscreen. The first player who misses five Bob-ombs loses.

Position trampolines to catch the falling Bob-ombs and bounce them onto your opponent's screen! You lose if you miss five Bob-ombs.