This article is about the object from the Mario franchise. For other uses, see Flipper (disambiguation). 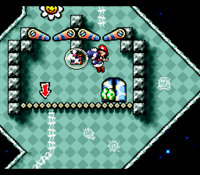 Flippers,[1][2] also known as one-way gates,[3] are bars that, once passed through, prevent access to the area before. They resemble pinball flippers. A Yoshi can open them temporarily if he jumps on them.