Bowser Castle is the third racecourse of the Special Cup in Mario Kart DS. This incarnation has less Thwomps than past Bowser's Castles, with only 4, and there are no lava spouts, unlike in numerous other versions. In the background is a forest consisting of dead trees and dark mountains, as well as a fiery orange sky. It features a rotating cylindrical bridge, a small chamber with a spinning floor, and four moving platforms above a portion of a large lava pit. The entrance to the castle is very similar to the one in Mario Kart: Double Dash!!. Bowser in the Hurricane is the staff ghost for this course.

Part of the music that plays in this course is an arrangement of Dark Land's music from Super Mario Bros. 3. Additionally, the music also includes elements from the music for Airship Fortress. 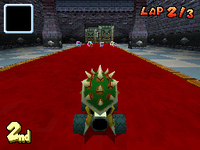 The players start by passing through a metallic doorway with a statue of Bowser's face above (which plays his laugh on entry). They then pass through a hallway with Thwomps. After climbing two sets of stairs they cross a thin bridge, which has barriers so players cannot fall back down to the hallway below. Next, they enter another circular room, which has a large metal circle as part of the floor that spins counterclockwise, while the racers are going clockwise. Burners from Airship Fortress appear in this room. A hallway with a Thwomp follows. This Thwomp actually moves horizontally out the window, then comes back into the castle. After a right turn and then a left turn, there is a spiral path. If racers aren't careful, they can fall a long way down into lava or back to the beginning of the spiral.

Racers will then encounter two paths; crossing a rotating cylindrical bridge, or driving down to a garden below it. The bridge provides a much faster route to go through, and if they fall off, racers can simply land in the garden, but will lose some time. The garden is partially paved and have grass parts that slows them down. Afterwards, racers will drive through metal grates with a large Dash Panel ramp that launches them to the final stretch that consists of four moving platforms, allowing racers to take a right turn to the finish line. The platforms move from left to right, but aren't difficult to traverse due to their moderate speed. Heavy racers can push lighter racers off during the ending section; however, some of the path has barriers preventing them from falling. The path from the platforms to the finish line is comprised of the same metal grates from earlier.

It is possible to dodge a Spiny Shell in this course. If the player is in 1st place while on the spinning bridge at the same time that someone fires a Spiny Shell, the racer can fall off of the bridge, causing the shell to miss the racer entirely.

Bowser Castle is the setting for mission 6-1. This mission involves the player as Bowser having to drive across the spinning bridge backwards without falling off in thirty seconds.

Mission 7-2 is also set at Bowser Castle. This mission has the player as Mario racing one lap against Bowser. 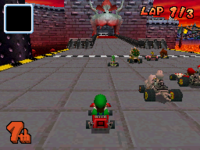