Eyerok, also known as the Hands[1] or Stone Hands,[2] is a pair of two large stone hands with an eyeball on each palm, making him a golem-like entity. Eyerok first appears in Super Mario 64 as a boss. His name could be either a portmanteau of "eye" and "rock" or a pun on the phrase "I rock."

In Super Mario 64, Eyerok is the boss of Shifting Sand Land and resides in the central pyramid. His chamber is a platform with a pit on three sides and is contained in a large red block. Eyerok guards the Power Star of the mission Stand Tall on the Four Pillars.

During the battle, Eyerok attacks by either slamming his fists or trying to push Mario off the platform. Each fist acts separate from the other, and only one fist at a time exposes an eyeball. If Mario is hit, he loses three wedges from his Power Meter. Mario can attack Eyerok by either punching or diving into the eyeball on either palm. If an eye on one of Eyerok's palms is closed, Mario cannot attack that fist. If Mario hits an eyeball on either hand three times, the hand is destroyed. If both eyeballs are hit three times, Eyerok is defeated, and Mario is rewarded with the Power Star. 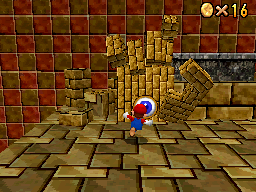 In Super Mario 64 DS, Eyerok acts the same as in the original game. He can be fought by any of the four player characters. Yoshi can reach Eyerok only by using a cap, as he cannot break the Brick obstructing the entrance to Eyerok's chamber alone.

If Yoshi is fighting Eyerok, he can attack by slide-kicking or ground-pounding into the eyes or by eating a flame from one of the small pillars and then blowing it out into either of Eyerok's open eyes. If Wario is fighting and attacks Eyerok with a punch, he needs to hit each eyeball only twice because of his strength.

In Mario Kart DS, Eyerok is the second boss of Mission Mode. He appears in the Sand Arena and is battled by Mario. There are three Item Boxes here that contain Green Shells. Eyerok moves up and down, trying to dodge these shells. After being hit one time, he jumps around while making fists. Then, he opens his fists, exposing his eyes. After being hit a second time, he stomps around again and moves up and down more frequently. After being hit a third time, Eyerok is defeated. Hitting either eye three times defeats him, regardless of which side was hit each time.

Eyerok appears in one of the Super Mario-kun comics. He appears on the cover of the sixteenth issue, which is based on Super Mario 64. As such, his role throughout the comic mimics his role in the game. Though more Super Mario 64 issues exist, Eyerok appears in only one. Mario attempts to attack him, even by farting on him, but Eyerok just pokes or smacks him with both hands. After finding out that the eyes are the weak points, Mario takes measures to make them open their eyes and then defeats them.