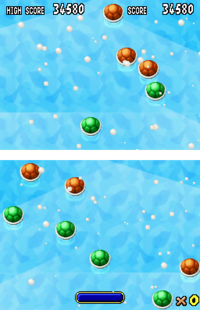 Shell Smash is one of Mario's minigames found in Super Mario 64 DS. The rules of the minigame consist of shooting a Green Shell against the Red Shells to gain points. As the shells hit themselves, the player earns points. However, by hitting many of them in a row, it is possible to gain more points, even more by knocking two Green Shells together. The player can shoot up to five Green Shells to score points. Once the player has no Green Shells to use, the minigame ends and the results are shown. Another, similar minigame involving sliding Koopa shells is Shuffle Shell.