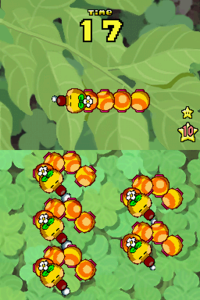 Which Wiggler? is one of Yoshi's minigames in Super Mario 64 DS and a Puzzle minigame in New Super Mario Bros.

The background music of this minigame is identical to that used when a character walks near a sleeping Piranha Plant.

One Wiggler is on the top screen, and many are on the bottom. The player must touch the Wiggler that matches the Wiggler on the top screen. The circles on the top Wiggler are the hint to finding the bottom one. If correct, the player gains five seconds to the time limit, and a new level begins. If the player picks the wrong Wiggler (when the Wiggler starts to move on Level 4, or if the player chooses the wrong one a certain number of times), then it gets angry, turns red (or wakes up), moves faster than normal, and deducts 10 seconds from the player's time limit, who then cannot choose again for three seconds. The Wigglers start out sleeping for the first three levels, but they begin to move when the player progresses on to the fourth level, increasing the difficulty. The timer begins with 20 seconds and can go up to 50. The minigame ends if the player chooses the wrong Wiggler too many times or time runs out, after which the correct Wiggler gives an angry stare to the player when turned red, or the one that the player should have picked wakes up.

In multiplayer, the timer starts with 30 seconds, and no time is added or removed. Instead, players lose one point for the incorrect Wiggler and get one point if it is correct. Once the timer reaches zero, the player with the most points wins.

Touch the Wiggler on the Touch Screen that matches the one on the top screen. Choose carefully, though; he has a terrible temper.