Not to be confused with Boo Balloon. 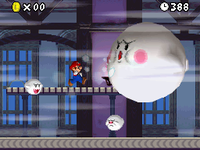 Some Boos and a Balloon Boo

Balloon Boos[1] are enemies that appear only in New Super Mario Bros., where they are encountered only in World 4-

. They are Boos with pink cheeks, and their tails resemble balloon knots, akin to their name. The level contains five Balloon Boos. They appear large at first, but when looked away from, they approach the player while expelling air and shrinking; otherwise, they stop and inflate by inhaling air at a rather slow rate, until they have assumed their massive appearance once more. Balloon Boos continue to chase Mario or Luigi even when they have reached their minimum size. Balloon Boos can be defeated with a Blue Shell or a Mega Mushroom.