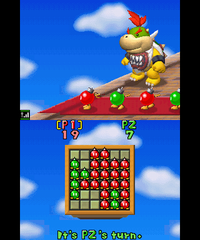 Bob-omb Reverse is a multiplayer Table minigame in New Super Mario Bros. The minigame is very similar to Reversi, but this minigame is playable for more than two players and has three different board sizes.

The music played in this minigame is a cover of the Toad House and Switch Block music from Super Mario Bros. 3.

Bowser Jr. is on the top screen with Bob-ombs, and a board of squares is on the bottom. The board size used depends on the number of players: A two-player game uses a 6×6 board, a three-player game uses a 7×7 board, and a four-player game uses a 9×9 board. The game randomly chooses which player starts. Each player starts with a set number of Bob-ombs placed in the board equal to the player count. Each turn, the player has to surround the Bob-ombs of their opponents by dropping a Bob-omb in the squares; each surrounded Bob-omb turns to the color of the player who played last. If all of someone's Bob-ombs are captured, that player is said to be "destroyed"; any Bob-ombs placed or captured by that player from that point onwards are instead colored black, and that player's score remains at zero for the rest of the game. Anytime a player takes more than three seconds deciding where to place a Bob-omb, the game shows which squares can be used for dropping Bob-ombs. If a player has no possibility, the game skips their turn. The game finishes when all squares are taken, when only one player is left standing, or when there are no valid moves for any players. The player who has the most Bob-ombs wins.

Place your Bob-ombs so they surround opposing Bob-ombs. Captured Bob-ombs change color and join your team. The player with the most Bob-ombs at the end is the winner.