This article is about the man-eating fish that debuted as Bubba in Super Mario 64. For the similar enemy from Super Mario Bros. 3, see Big Cheep Cheep.

Cheep Chomps (also parsed as Cheep-Chomps),[1][2] originally called Bubbas,[3] are big relatives of Cheep Cheeps that first appear in Super Mario 64. They closely resemble Boss Bass from Super Mario Bros. 3 in later appearances, and much like Boss Basses, they attempt to eat Mario.

In Super Mario 64, Bubbas appear in two places on Tiny-Huge Island. As revealed from source assets, they were directly based on Blurps during development as their internal name is "buku," a shortened version of Blurp's Japanese name. Whenever they spawn in the player's view, a splash appears over them, indicating they have dropped into the water. They sluggishly swim around under the water, but when they see Mario, they speed up drastically and move to whatever depth of the water he is at. They then point themselves at Mario and quickly shoot forward with their mouths open, attempting to eat him, before snapping them shut with the same "chomp" noise Piranha Plants use. Sometimes, they open and close their mouths quickly as Mario approaches. If Mario is on the surface of the water, they may end up "leaping" a small bit from their launch. Bubbas are very accurate, but they can be dodged if Mario manages to get behind them. If he does so, they will attempt to quickly turn around to get to him, but they can still be "followed" relatively safely. They can also be jumped over if timed well, though he will be damaged if he ends up landing on one, and if this is done near the stage border, it may somehow manage to eat him without even opening its mouth. Additionally, if he swims close enough to the beach near one of them, the water will be too shallow for it and it will swim away. At a certain distance from this beach, it may pursue Mario without trying to eat him, but it will be less likely to try if Mario is facing the beach. If Mario is eaten by a Bubba, he loses a life.

In Super Mario 64 DS, Bubbas' behavior has been changed noticeably to make them less dangerous, possibly due to the imprecise controls on the original Nintendo DS; they now go a relatively constant speed after seeing the player, which is slower than their pursuit speed in the original. This speed carries into their turns and lunges, which are now done in a slow arc and can no longer result in "leaps." They also no longer swim along the level the player is swimming when pursuing them, instead swimming at a constant level and changing it only while lunging at the player, after which they return to their normal depth. This also results in making them in general less accurate and easier to dodge; in fact, they may lunge before even facing the player. However, the player can still be "sucked in" if they touch the side of their open lips. Additionally, the one closest to the course's entrance can be defeated with a nearby Super Mushroom.

In New Super Mario Bros., if Mario or Luigi swim too close to a Cheep-Chomp, it follows him, opens its mouth, and tries to eat him. If Mario or Luigi is eaten, they lose a life. They can be defeated, like all other fish, with a fireball or as Mega Mario/Luigi. Only three appear in the entire game, all of them appearing in the same level: World 3-1. Additionally, it is the first game to give it its current English name and design, which is based on the Super Mario 64 DS incarnation except retextured purple with a turquoise tail and dorsal fin, likely so players can more easily distinguish them from the less-aggressive Mega Cheep-Cheep. Incidentally, their coloration is somewhat reminiscent of Blurp. They are about three times as large as Cheep-Cheeps in this game.

In New Super Mario Bros. Wii, only two Cheep-Chomps appear: one is in a bonus area of World 4-4, and another is in a bonus area of World 9-2. A fireball or Star can defeat Cheep-Chomps, but they are invincible to ice balls from Ice Mario. Two changes are made from New Super Mario Bros.: it is distinctly larger, being the largest Cheep Cheep in the game, and defeating it releases three 1-Up Mushrooms. The Prima guide for this game also incorrectly refers to the Cheep-Chomp as a Porcupuffer.[4]

Cheep Chomps once again appear in New Super Mario Bros. 2. One makes its first appearance early in World 1-5. When defeated, it releases three coins. They reappear as common enemies in World 4-5. Another appears in course one of the Impossible Pack, near two whirlpools. Like in the previous game, they are the largest Cheep Cheeps, being about 3 1/4 times as large as normal Cheep Cheeps.

Swim for Your Life

The Cheep Chomps reappear in New Super Mario Bros. U, New Super Luigi U, and New Super Mario Bros. U Deluxe, and act the same as in the predecessors. A new ability they possess is the ability to defeat any enemy they run into, which is utilized prominently in the levels they are featured in. This enemy is prominently featured in the level Swim for Your Life! in the former, and in the levels Cheep Chomp Chase and Star Coin Deep Dive in the latter. This time, it takes three hits from a fireball to be defeated, unlike earlier titles, where it took only one. However, like a Porcupuffer, it returns shortly afterward. Cheep Chomps are also among the only three types of enemies that can defeat Nabbit.

In Super Mario Maker 2, a Cheep Chomp makes a cameo in the background of underwater levels in the New Super Mario Bros. U style, appearing for a brief period of time before swimming away. Their behavior is instead given to Porcupuffer while underwater in the Super Mario 3D World style.

In Mario Golf, either a Bubba or a Red Blurp jumps out of the water if the ball lands in it. Bubbas are much smaller than in Super Mario 64. 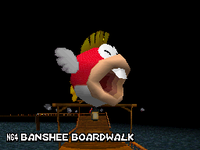 A Bubba makes a minor appearance in Mario Kart DS, in the Banshee Boardwalk course, where it jumps out of the water and over the course. The Bubba replaces the big Cheep Cheep from the original Mario Kart 64 version.

Cheep-Chomps[5], also referred to as "Boss Bass"[6][7], are also found in Yoshi's Island DS. They patrol their own little section of water, and periodically leap out in an attempt to swallow Yoshi whole. Boss Bass can only eat Yoshi while they are descending. The mid-boss of World 3, Bessie Bass, is a giant member of the species.

While they do not appear in later games of the Yoshi franchise, Lunge Fish are given a similar leaping behavior afterwards.

A giant Cheep Chomp (also called a Big Cheep Chomp by Prima Games[8]) appears in Paper Mario: Sticker Star as an obstacle. It can be seen on the surface of the water in Long Fall Falls, pursuing Mario (who is riding a raft down the river). The Cheep Chomp appears to be made of cardboard, featuring a propeller-like tail. The Cheep Chomp can destroy parts of the raft Mario is riding on by ramming into it, and being eaten results in an instant Game Over. When both reach a waterfall, Mario and his raft continue to fall, while the Cheep Chomp's "propeller" ends up propelling it upward, into space.

Cheep Chomps appear in Mario Party: Island Tour in the minigame Cheep Diamonds and Starring Artist. In Cheep Diamonds, they swallow an amount of diamonds and then circle around in the water; the players are trying to pick the Cheep Chomp that swallowed the most diamonds.

In Super Mario Party, Cheep Chomps can appear in the Rattle and Hmmm minigame, alongside a Torpedo Ted and a Dragoneel. Feeding Friendsy also contains mechanical Cheep Chomps that the players must throw balls into. They also appear in the background of Mushroom Beach. 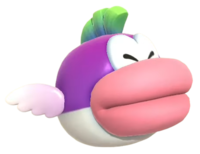 A Cheep Chomp appears in the Mario Party Superstars version of Yoshi's Tropical Island, taking over Bubba's role from the original game. When someone lands on an Event Space, the Cheep Chomp will bring Toadette to the other side of the board, switching places with Bowser. More appear eating all of the players except for the winner after a game on Yoshi's Tropical Island is finished.

Cheep Chomps, alongside Cheep Cheeps, Eep Cheeps, and Bloopers, appeared in Fishing Tourney #12 in Animal Crossing: Pocket Camp as the largest fish that could be caught, due to the tourney being held around the same time as Mario Day. A Cheep Chomp balloon attached to a Brick Block could also be obtained as special furniture when the player reached the 2,900, 3,100, 3,300, 3,600, or 4,100 cm milestone. Although they are depicted with their trademark closed eyes in the scenes where they are caught by the player, their icon depicts them with open eyes similar to Cheep Cheeps and Eep Cheeps.

In Super Mario 64 DS, Cheep Chomps have no sunglasses, and their design greatly resembles Boss Bass with more defined wing-like pectoral fins, a yellow dorsal fin and a triple-lobed tail. They still have distinguishable scales, but they are smaller and red. Cheep Chomps are also smaller and less wide than before, while the opening and closing of their mouths is done smoothly instead of instantaneously. The same design was reused in both Mario Kart DS and Yoshi's Island DS, except the Cheep Chomps were given a brighter shade of red.

In their debut appearance, Super Mario 64, Cheep Chomps have distinguishable orange scales and small red fins like the game's design of Cheep Cheep (also known as Bubs), and also wear sunglasses, have no tooth, and have a wide, somewhat fat appearance from the front. Cheep Chomps retain their appearance in Mario Golf, but were made a lot smaller.