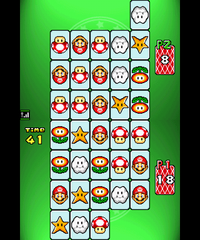 Vs. Pair-a-Gone is a 1-on-1 minigame in New Super Mario Bros. It is exclusive to the Vs. Battle mode.

The minigame plays exactly like its single-player counterpart, Pair-a-Gone. Both players must clear the cards off their table by tapping two identical cards adjacent to each other, be it horizontally, vertically, or diagonally. Both players start with 30 cards (for a total of 60), and any pairs that are cleared are placed in the opponent's deck. The player with fewer cards overall when the time is up is the winner. The minigame ends early if a player removes all the cards from the table.

Match up cards horizontally, vertically, or diagonally to remove them from the table. Cleared cards move to your opponent's table. The player with the fewest cards when time runs out wins.